View from the right seat.

We’re sitting around the bar at the Best Western, and I’m trying to ignore the ever-present TVs blaring overhead. They seem to be everywhere here, in the lobbies and hallways of budget hotels, lining the walls of greasy spoons and sports-bar/restaurants. They spew inanities to anesthetize the need for meaningful conversation and give the saccharine impression that you’re actually learning something until you stop and try to recount what you’ve actually come away with in place of real human contact: alternatives to facial dermabrasion, innovations in sleeping eye-masks and in-depth coverage of the latest viral hockey blooper videos (the latter strikes me as bizarre on more levels than I can easily enumerate). 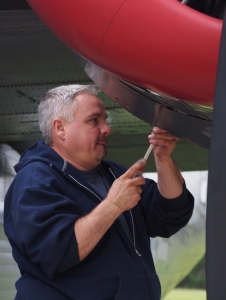 Robert tends to a cantankerous engine

But I’m trying to ignore the oppression of the intrusive, over-modulated chirpy voices, the flashing look-at-me video cuts. I’m trying to pay attention to the casual conversation around me – a handful of remarkable men musing on a typical day of bringing three one-of-a-kind artifacts to life, climbing in and coaxing them, rumbling and rasping, into the skies. A handful of men and women who experience, on a daily basis, the dreams of a generation, and keep alive the memory of another.

This morning was the first day of the tour, a three-week shakedown loop around Florida in preparation for the 10-month tour across the entire country. Mac, Mark, Steve, Elaine – many of these folks have been doing this for over two decades, and conversation doesn’t go more than a minute before someone pipes up with “Do you remember that time we were in Tallulah, and…?”  I, of course, don’t remember – I’m the newby, a part-part-part-time volunteer begging seat time when I can, while I try to sneak in enough time in the Mustang to really start pulling my weight (yup, giving rides in the Mustang is a heavy load to carry, but I’m willing to step up to it).

Fortune turned my way this morning and Steve offered me his seat in the B-17. It had been almost a year since I’d flown it, but co-pilot duties are pretty minimal, especially with Mac in the left seat. I’ve written about Mac before – highest time B-17 pilot in the world, including, apparently, wartime veterans. An enviably full head of silver hair, George Hamilton tan, and – no matter how cold it is out – polo shirt and shorts. He does his best to play the gruff captain, but that boyish smile keeps peeking through; he’s just having too much fun to hide it. I call out the checklist and hHe walks me through the startup: pre-oil, starter, boost and prime, then watch the gauges as rpm comes up. I run the radios (badly – twice I identify us as North American, er, Beech, er Boeing 93012), and prop governors (better), and Mac handles the yoke and fistfuls of throttles.

We trundle into the air, leaving New Smyrna Beach behind on the first glorious day of sunshine we’ve had since I’ve been down here. Somehow, Mac says, the weather always clears up just in time for the tour.

I pull up a heading on the charts and Mac points us southbound, toward Witham Field, on the coast in Stuart, FL. Glittering everglades slide by a thousand feet below us, and the next hour and a half disappear in an instant. Too soon, I’m pulling up destination frequencies and runway lengths, closing cowl flaps, and calling out the pre-landing checklist. Mac greases it on, of course, despite a 15 knot crosswind. I duly flub the radio calls again, but on the second try do get us cleared to the ramp where a crowd has already gathered, pressed against the fence with clicking cameras to capture our arrival.

Mac seems surprised that I don’t get it. “They’re waving at you. Wave to ‘em.”

Oh – right. And in an instant, I remember being that kid on the other side of the fence, so incredibly excited just to see a plane like this. And when the pilot taxying by looked me in the eye – I could tell he was looking right at me – and waved? Well, that was better than a trip to Diary Queen and Disneyland wrapped into one. I slide my window back, break out the biggest smile I can, and wave like hell. And let me tell you: that smile is the easiest thing in the world right now.

This is why we do it.

2 responses to “Once More, With Feeling”