Our waiter on the rooftop bar at Ambos Mundos thinks for a moment before deciding to rescue me from Bad Spanish and suggests an alternative phrasing. Yo bebo, tu bebiste – but if I’m trying to say that we only want drinks, he recommends “Solo bebidas”. I try again, and he coaches me through a couple of iterations before I get that certain je ne sais quoi (sorry!) into the pronuciation and he declares me ready to order. I get “Dos mojitos, por favor” right on the first try, but he’s having fun, and we go back and forth to clarify that it’s a total of two mojitos, not two each for me and Devon, who’s still trying to decide whether she’s amused or mortified.

The view of the old city at night isn’t spectacular – Havana doesn’t have the classic, iconic skyline of so many great cities, but it’s impossible not to appreciate its appeal. Seven stories up, the ocean breeze is unimpeded, cool and fresh, not baked to a pudding by the sultry streets below. Leaning back in the wooden chairs, looking out past improbable New World interpretations of renaissance cherubs sculpted into the low walls, it’s hard not to imagine, at least for a moment, calling this place home. Below, the Saturday evening bustle is just getting started, and Latin jazz is rising like streetcorner catcalls among the billows of young Europeans, Cubans and other assorted Latinos out to be seen, and to see what the night has in store for them. Memories of Barcelona, kindle, take hold. Yeah, I could sit up here and write, just like… who hasn’t thought that from the rooftop of Ambos Mundos?

Our waiter returns with the drinks, ready for another round of Bad Spanish with Pablo. I declare the drink “exelente,”but he cocks his head sideways, not sure he’s understood my meaning. I try again, and he latches onto the “x”: I’m saying it to much like a “j”. The Cuban “x” is a good and solid one (too much time in Barcelona?), “eXelente” but if I really want, he concedes, I can play it with a drawn out “s”.  I try, he drills, and again pronounces me fit to comment on the drink. He already knows he’s getting a good tip out of this.

Devon endures our little exchange with equanimity, then muses (in what I hope is envy): “I wish I could just speak Spanish without having to learn it.”

She concedes that there’s some truth to the observation. Over our (pretty darned good, actually) drinks, further muse about the changes in store for Cuba. The word on everybody’s lips is that tomorrow’s paper will be emblazoned with a picture of today’s Obama-Castro handshake and the portents of post-imperialist capitalism poised just over the horizon. The younger generation is all for it; the older generation is not so sure. Yes, the “blockade” (as the US embargo is called) and the “special period” (a lovely euphemism for the privation they experienced when the Russians cut them off) have been difficult. But they remember what they left behind, and the ideals, misguided or not, that their friends and family died for. And there’s no clear consensus how those ideals will be honored, or even remembered, when Walmart and Nordstroms come calling in a two-front assault.

Eventually, we decide it’s time to move on. A few of the others had headed for some cafe in a corner of Plaza Vieja that Jeff remembered having good music, and frankly, I’m eager to explore more of the city’s streets. We flag down our waiter for the check and after we banter a bit about how many mojitos we really had, and how much we owe in addition for the Spanish lesson. Gratis, he sais, but then puts a finger to his lips with a thought that has just occurred to him.

“And if it’s really very good, then it’s ‘ricissimo.’” He lets the word roll out, lingering on the “s”s.

I try that, too, mimicking his emphasis. “Ricissssimo.” He approves.

“Yes, for when something is really good.” He pauses, glances over at Devon. “Like, being married to this one, here.”

Damn, he’s good, too. And he knows it. Devon blushes, and we both laugh as she pulls out a ten to pay.

His eyebrows pop up in mock surprise. “Wait – how did you find this one?”

“She pays for you? I have never found a woman who pays for me.”

“Of course she pays for me. She’s the one who has the money.”

Devon chimes in: “He gives me all his money, and I spend it. We’ve found that it works out best that way.”

Our waiter whistles appreciatively, takes our change and wishes us a good evening. The drinks were 6 CUC for the pair, but we leave a 3 CUC tip. He’s earned it. 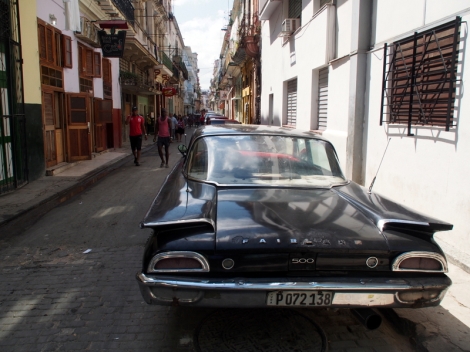 (Sorry for the burst of posts – this is the first internet access I’ve had since Friday morning. Will probably end up having internet once every two or three days, so posts will be coming out in fits and starts.)