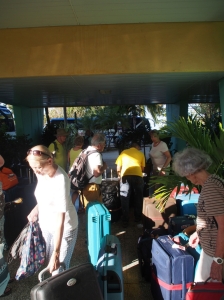 Trinidad, on the south central coast of Cuba, reminds me of one of those Greek Islands frequented by massive cruise ships: charming antiquity engulfed daily by waves of camera toting tourists, flooding the streets like rotund, pasty all-consuming locusts. Except that in the case of Trinidad, the “cruise ship” is one of the massive Soviet-era hotels permanently anchored on the gorgeous white-sand playa east of the city. And rotundity aside, we are those tourists.

Hotel Ancon is the poured-concrete beach edifice that serves as our lodging for the night. It retains all the charm (and service amenities) it must have sported during the Soviet era, with entirely survivable, if indifferent, food, lodging and services. But the beach, for those inclined to lie flat and immobile, is lovely. Bathwater-warm blue Carribean waves gently lapping at fine sand, a cool breeze coming off the water, and tepid all-you-can-drink plastic cups of something we believe is supposed to be a pina colada. 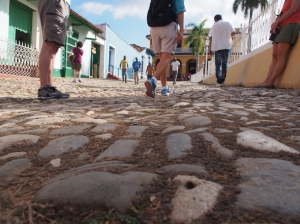 The real draw, of course, is the old town, up on a hill about 10 km west. The plaza predates Havana and has, by dint of its tourist draw, been beautifully preserved, with insidiously-uneven cobblestones and steep winding streets that seem to change their mind, every hundred feet or so, about where they’re going to lead you. The heat is already brutal by the time the bus drops us off at the plaza for the morning’s explorations. It’s nine a.m. and the thermometer’s going nowhere but up. 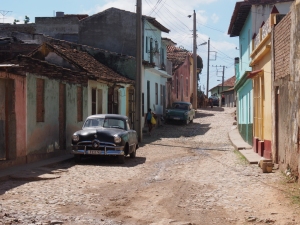 Devon and I break away from the main knot of the group and make our way up the belltower, where there’s a cool breeze and uninterrupted view of the town and surrounding mountains. Lovely, lovely. But like most folks on this ET trip, we’re eager to get away from the stream of tourists (who are probably thinking the same thing about us), so we roll the dice and head north, uphill into what feels like a more residential neighborhood.

At the next corner, a lanky man with teeth like an old piano asks the same question and reaches out his hand to shake mine. He keeps going with other questions, too fast and fluent for me to keep up, so I ask him to repeat, and to slow down. We’re about three or four minutes into my Spanish lesson when I remember that Devon is waiting patiently, but she signals me to go on – she’s happy to indulge.

Turns out the fellow is asking whether I like cane juice. Jugo de cana. Um, sure. Another man comes out to join the conversation, a Cuban Oliver Hardy to our new friend’s Stan Laurel. He introduces himself and asks, as well, if I’d like to try some of the local cane juice. They take my hand and Devon follows me into the shadows of what I now recognize as the corner bar. I have a feeling I’m going to be buying everybody a round here, but that’s fine – it’s a cultural exchange opportunity, isn’t it? And since it’s still only 10 a.m. on a weekday, this morning’s drinking crowd is still pretty thin.

After they pour me a shot of kerosene (no, not really, but it’s pretty scorchy stuff), a 3 CUC note on the concrete bar to cover the next round seems to make our new friends happy to toast our health, Cuban-American friendship and the general numbing effects of alcohol waaaay too early in the morning. Devon takes a polite sip to help me get through the remainder of my shot (“Best wife in the world,” I tell our friends); we make our excuses and retreat back into the heat of the day.

It’s after the sun goes down that Trinidad comes alive. It’s impossible to tell from where among the winding streets the music is coming from, but it seems as if there’s a band playing down every alley and through every open window. Venga! Escuche! Come! Listen! And it’s impossible not to. There’s so much energy, whether the band is made up of old gray men teetering over their drums or lithe youngsters, glistening with sweat in the evening heat. Salsa, rumba, congo and calypso pouring down the streets and mixing like rain.

We stop in a few places and lose ourselves in the beat, but the day has taken its toll, and by the time my watch reads 10:30 – our little group’s first agreed-upon check-in time for the night – I’m ready to catch a cab home.

Catching a cab turns out to be harder than we’d expected: the street corner on which they’d been congregating when we were dropped off is now deserted. There are few parked cars down the block, so I go to investigate while the rest of the gang waits. I poke my head into the first in the row, a Lada; it’s empty, but I hear a whistle from the side street. And a young man in flipflops comes running eagerly, waving his hands as if to say I’m here! I’m here! When I tell him we need two cabs, whistles again, this time over his shoulder, and a second fellow comes running in close pursuit.

Diez – ten CUCs, or about twelve dollars per cab. A bargain for the twenty minute ride back to our little tropical gulag out in the flats. I hop in and direct our little two-cab convoy back to the corner where Devon, Jeff and the others are waiting.

It’s only after we leave Trinidad central that I realize that Roldi’s headlights don’t really work. I mean, they seem to have two settings: “high” and “off,” and for reasons I can’t follow, Roldi uses “high” only when there’s traffic coming the other way. I try to inquire, but my Spanish skills diminish proportionally with the amount of adrenaline coursing through my veins. But Roldi is happy to play language tutor while I clasp the armrest in a deathgrip with one hand while trying to bolster the remains of what is supposed to be a seatbelt with the other.

The lights of the Ancon loom on the horizon sooner than I expect – either time got kind of compressed there, or Roldi was driving faster than I thought. But we climb out, tip him an extra couple of CUCs for a new pair of headlights and shake off the adventure in nervous laughter. Jeff asks if the smell of gasoline was as strong up front where I was sitting. I tell him I don’t know – I must have been holding my breath the whole time.