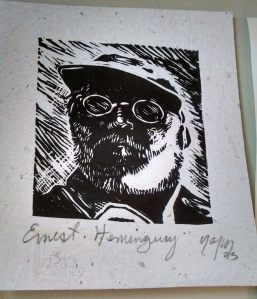 A small portrait of Hemingway, printed on handmade paper, scowls down at me from the wall above my office desk. Or maybe it’s not a scowl – maybe it’s just a dare. Hemingway was always big on dares, wasn’t he?

Ernest Miller Hemingway may not be the most admired 20th century American author, but I think there’s a strong case that he’s the most envied. In my first writing class at Stanford, our professor asked us to write a passage in the style of a favorite author. The women in our class chose Ishiguro, Achebe, Wallace and Woolf. Chekhov may have been in there too. But the men? Hemingway, every one.

We had a little nervous laugh about it, but there was something there, under the surface that none of us would admit. Hemingway’s style is enviable, yes: clean, sparse yet evocative, painted in short straight brush strokes. But there was more to envy than just his writing. I think, at least at some level we wanted, at least a little, to be Hemingway. It’s impossible to ignore the appeal: rather than contenting himself with stories written with words on the page, he methodically constructed his entire life to be a grand, manly story, one that would rival anything he would put to down in ink. He sold us his life as much as he sold us his stories, and his later protagonists slip so closely into his own wake that I’m surprised anyone can keep straight which boys belonged to Hemingway and which to Thomas Hudson.

Havana, where he spent many of those fiction-intertwined years, has not been shy about making a business of embracing the man’s legacy. The old city abounds in relics and shrines; I lost track of how many bars in Havana claim to be his favorite, each elbowing for their piece of the tourist trade. At La Bodeguita, they’ve preserved the spot where he carved his name into the bar, and will remind you more often than you’d like that he proclaimed their mojitos the best in the city. At Ambos Mundos, where he sat and wrote and drank from the rooftop, they’ve kept his old room as a little museum and will let you examine it for the price of a couple

of CUC’s. La Floridita, down at the other end of Obispo Street, trumpets itself as his favored spot for a daiquiri (in fact trumpets itself as the cradle of the daiquiri itself), and used to have a little velvet rope around what had been Hem’s favorite seat. The rope and seat have been replaced by a life-sized bronze sculpture of the man bellying up the bar, presumably because the photo ops are a better draw for the tourist trade. And boy does it draw the tourist trade – bronze Hemingway seems to endure a lot of awkward selfies despite of the persistent legend that taking your photo with him there will doom you to never win a Nobel prize for your allegorical novellas of mortality and salvation. But I guess when you’re living on the edge, there are some risks worth taking. 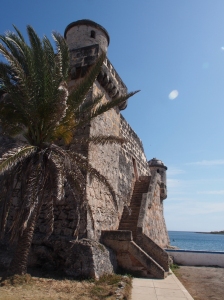 To the east of Havana lies Cojimar, a gorgeous little fishing village that draws pilgrims by evocating the ghost of Gregorio Fuentes, first mate of Hem’s beloved Pilar and the ostensible “Old Man” of the novella. What passes for a waterside main street has bar after bar where you can pose with a Disney-esque cutout of Papa and hold up the plastic marlin you helped him land, or unwind with the daiquiri-quaffing sculpture of Papa kicking back on the patio of another of his undisputed favorites along the quay. He even has a little one-man pantheon in white marble at the end of the street. Somehow, the tongue-in-cheek humor with which they seem to serve up their icon out here makes it all tolerable, and taken alongside Cojimar’s stunning beauty, it’s easy to imagine yourself settled into the back room of La Terraza looking out over the water, lost in alcohol-fueled tall tales about “the one that got away.” There would be far worse ways to spend an afternoon. 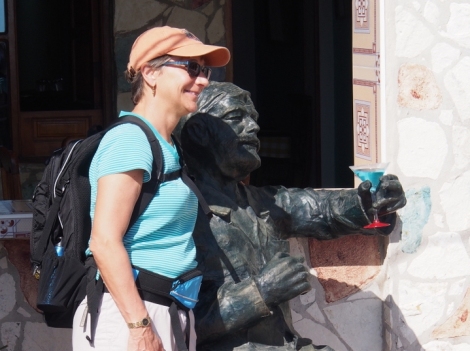 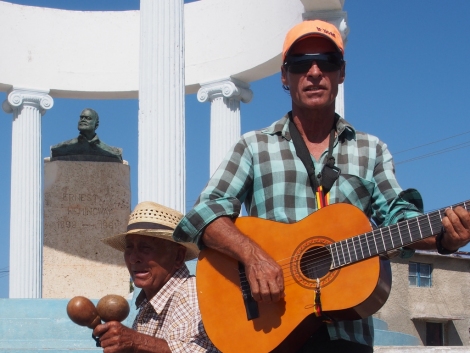 If you want a place that takes itself seriously, dead seriously, you need to pay 20 CUCs and take a cab ride inland, up to the hills above Havana where Hemingway made his ranch. The tour buses roll into Finca Vigia about every fifteen minutes, disgorging streams of camera-toting Germans (why is it always Germans here? Where are the French, or English?) who are led up the cobblestone path for bedroom and trophy hall photo ops through the open windows, down the shaded path past the pool house with its row of tombstones for Hemingway’s beloved cats, and up around the wooden walkway where his even more beloved Pilar, impossibly far from navigable water, is mounted like a trophy itself on concrete posts. Everywhere, there are docents lying in wait, eager to give you unasked for details of his life. 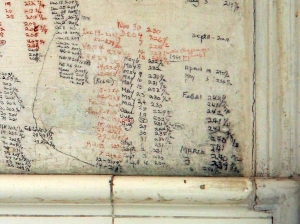 “You see there?” This latest one interrupts my reverie and urges me to peer in through the bathroom window, to the wall by his old bathroom scale. The portion above the tile is covered in uneven tallies where Hemingway kept track of his weight in pencil. His last wife, Mary, was notoriously fastidious, but my language skills are insufficient to ask what she thought of her husband’s opportunistic record-keeping. Besides, I’d really rather not – this is the third ponytailed young lady in under fifteen minutes who’s sidled up to me, offered a historical tidbit, then asked for “una pequena propina”, a little tip, perhaps, for her troubles. Really, I’d just like to walk and wander and imagine what it would be like to live and write here.

The exception is Maria. Maria Elena Otero Carballo, who notices me peering uncertainly into one of the two poolside changing rooms and urges me to go on, have a look. It’s filled with pictures of the Hemingway family at play, and she takes clear delight in my curiosity. We spend the next ten minutes making the rounds together, and when I reveal that I’m a writer, she insists on sitting me down poolside (“where He used to write”) and taking a picture. She’s flattered that I ask her name, and I cheerfully give her all the rest of my change before bidding her farewell and hoping (in earnest) to see her again soon.

I run the gauntlet of ponytails back up past the main house, but there’s still another ten or so minutes before I need to be back at the front gate. I was discouraged from trying to take the local buses up here and, from the twists and turns we’ve taken off the main road, I’m glad I opted for the cab and asked him to wait for me. “How long?” he asked. I dunno. An hour maybe? He seemed incredulous that I’d want to spend a whole hour exploring la Finca, but was willing, for an additional 10 CUC, to indulge me. Honestly, with all the docent-dodging, I’m done with this place, but that 10 CUC feels like real money, so it almost feels like a point of pride to get every last minute that I’ve paid for here in Hemingwayland.

I’m halfway down the path to the gate when I remember the little patio in the shaded lee of the main house. It has a couple of wrought iron rocking chairs, a matching table and…no docents. I can’t resist: I plonk down, pull the laptop out of my knapsack and start writing. Making stuff up – random sentences. Just so that, if I ever get around to folding them into some actual idea for a story I’ll be able make my own life mirror a little of my story’s. Yeah, I’ll say when I show anyone the finished product, I started this one on the back porch of Hemingway’s place the last time I was in Havana. Yeah, Havana.

I may not have his beautiful, sparse prose, and I’ll never have a Nobel prize for literature. But damned if I’m going to be the only one not milking the legend for all it’s worth. And this way, the next time I feel the ghost of Hemingway scowling over my shoulder, I’ll be able to lean back, look him in the eye with a smirk and call his bluff: “Hey, two can play at that game.”

[BTW: my favorite pics from the Cuba trip are online here. A larger set of combined pics from both me and Devon are here, and if you just want to see a ton of old Cuban cars, look over here.]

[Also BTW: Yesterday morning I finally hit “submit” on the NSF proposal I’ve been panicking about for the past month and am coming up for air. Turns out I’m not very good at doing nothing. But am welcoming opportunities to go on walks and stuff like that, so don’t be shy if you’re in the neighborhood, okay?]