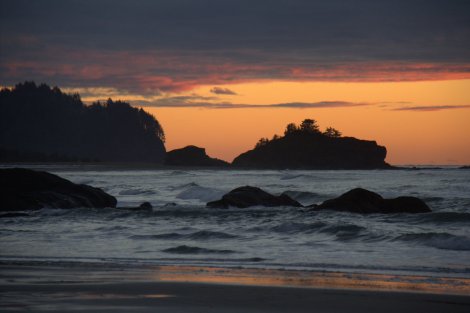 TLDR: ignore the text. Look at the pretty pictures.

By yesterday afternoon, I was wiped out. I’d spent the past two days meeting with our farm manager, the Conservation District, Land Trust, barn repair guy, prospective orchardist, lime-spreading guy, insurance guy, architect, City Planning, County Planning and County Environmental Health. Whew. Sure, everyone was lovely and helpful, and slowly maneuvering the farm back into shape is fun, but I was more than done. And staring out at the water, I kept remembering that one of the reasons we were drawn to Port Townsend was the absolute gob-smacking beauty of the peninsula. Gob-smacking beauty that I’d been ignoring since we got involved with the farm some time last spring. It was well past time for some random exploration.

I’ll admit that I didn’t actually know where I was heading until I passed Sequim, westbound on 101. It was then that I realized that if I didn’t dawdle, I could make Cape Flattery, the absolute northwestern corner of the peninsula (and by extension, the conterminous United States), with an hour of sunlight to space.

It would be understatement to say that the drive was spectacular: climbing winding mountain roads overhung by Christmas-morning icicle trees, then dropping down into stark wind-blown bays. Across the churning gray water of the Strait, the rugged mountain skyline of Vancouver Island loomed just out of reach. 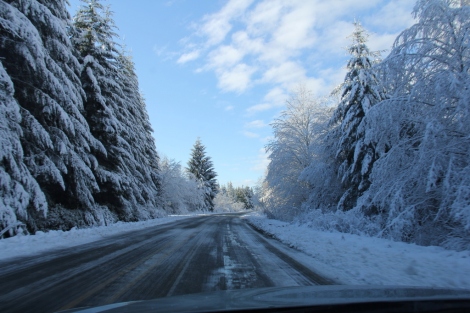 The Cape and surrounding territory are property of the Makah Nation, so I stopped at the tribal center in Neah Bay to pick up a recreation pass. Dawdled around the trail breathing in the immense nature of the place and took too many photos, then backtracked to the ice-crusted sand of Hobuk Beach for sunset. Ahhhh….. 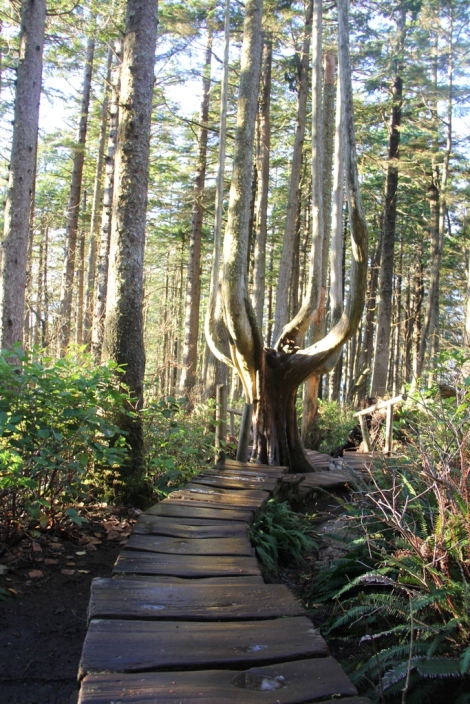 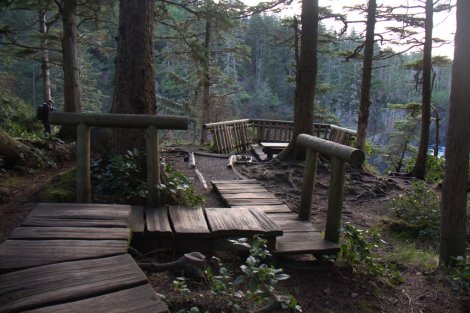 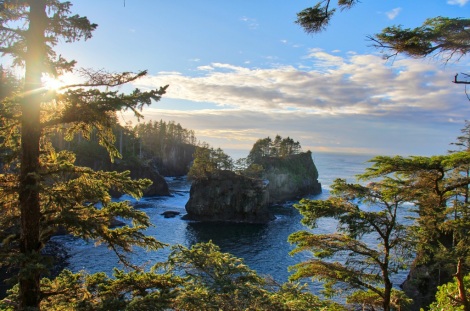 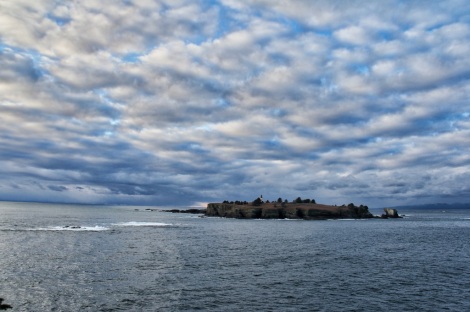 Sundown over the Wa’atch River. Yeah, those colors are real.

Of course, then, there I was at the far end of the earth, and I needed to figure out where I was going to eat and stay for the night. I stopped in at the General Store, where they suggested I try Linda’s Kitchen, just across from the boat launch.

Now, in the summer, I would imagine that it gets pretty hopping out here, but in mid-December, with temperatures lurking in the upper 20’s, things are quiet. Most folks are either working the fishing boats or just hunkering down. The young woman at Linda’s seemed surprised to see me – said I was their first customer this week, but that she had fresh steelhead off the boats, if I’d like. Yeah, I liked. Roasted it up with caramelized onions and thin-sliced fried potatoes on the side. Yeah, I liked.

I chatted with her brother while I ate – they’re from Neah from way back. He showed me some of the Makah art his father had painted, and drew my attention to a gilded frame on the front wall in which hung the treaty between the Makah nation and the kingdom of Spain.

You see, what with the Makah being a sovereign state, they have the right and responsibility to negotiate their own treaties with foreign powers.  And back in the 1790’s, the Spanish had established a fort on Makah land. There were some, uh, misunderstandings, and the Spaniards withdrew, but there was never a formal end to hostilities until 2008, when the consul of Spain wished to commemorate Neah’s Bay’s historical significance for his country. To clean things up, Skyler’s father was called upon to draw up a treaty putting “the troubles” behind them and declaring everlasting amity between Spain and the Makah people. The writer’s proof of this treaty is what hangs in the front room at Linda’s. Yeah, I’m kicking myself for not taking a picture.

So I was well-fed and now very sleepy, and what with this being two days before the earliest sunset of the year up here, it was well past full dark at 5:00. The snow-covered windy mountain roads were not sounding great.

I remembered there being a “vacancy” sign at a set of little bungalows on the edge of town, so I said goodnight and thanks to Skyler and his sister and headed over to inquire. But what with this being winter in a small town, there was a “closed” sign by the time I got there,, along with a number to call for assistance.

The thing is, as far as I can tell, there’s no cell service this far out on the peninsula, at least nothing a GSM phone can talk to. So I headed back to Linda’s Kitchen to ask if I could use their phone, but I noticed that, under the place where the Linda advertised “Home baked pies,” it also said “Rooms available.” Problem number two solved.

Dawn over the peninsula came as late as the sunset was early – I don’t think I actually saw the first rays of daylight until close to 8:00, by which time I was well on my way back along the purple-tinged bays and ice-encrusted trees glowing pink and orange against the brightening sky. It was beautiful and serene, compounded by the realization that my phone hadn’t pestered me with misdirected political rants or Facebook mentions for close to a day.

Anyhow, by the time I drifted back into cell coverage on my way back this afternoon, I was in a lovely, restful disconnected state of mind. Took the long way home, winding my way through Joyce (candidate for best sense of humor for a small town: the main road crosses Itza Creek and Uptha Creek at the intersection of Bytha Way). Stopped for a stroll out on Dungeness Spit, clambering over the immense, antediluvial driftwood and gazing out at Mount Baker, a hundred miles away but feeling close enough to touch.

Now, back to meetings and phone calls. We’ve finally gotten sign-off on the well, but our wetlands assessment document needs to be changed to reference municipal code buffers instead of the county ones, and Environmental Health has let me know that there’s no way they’re going to approve the city-side ADU sharing a septic system with the county-side structures. More work to do on this, always more work. But somehow, after that little 18 hour vacation, it all feels so much more manageable. I need to do that more often. I think probably we all do.

[And oh, hey – heads up: I’m headed back to Antarctica on the N.B. Palmer in just under two weeks. I probably ought to start thinking about that, too…]

6 responses to “The Ends of the Earth”