How’s this: Tomorrow, Devon and I are dropping Jeremy off for two weeks of metalworking in Massachusetts and heading north through Maine and the Canadian Maritimes in a rented camper van. No, we’ve definitely not done that before. And to be frank, we’re a little nervous about it.

There are surprisingly few places around New England to rent a camper van, and they all seem to be up in Maine. Sure, you can rent a big, hulking RV anywhere, but we were after the camper van experience. But Devon found a place in Jersey City, right in the sweet spot north of the Newark airport. Booked. Flew in. Side trip to Manhattan to get pampered and fed freshly-baked kugel and biscotti by Uncle Larry and Aunt Beverly, then off to Escape Camper Vans to pick up our ride.

Now, much like some of the companies in New Zealand, these guys paint their cars funky colors. They take a lot of pride in it – apparently each one is hand-painted by a local artist. Go ahead – check out the site – there’s some pretty awesome stuff there. So as we were tromping down the end of Marin Boulevard to the Escape Camper Vans office, we took note of some of their vehicles parked on the street. Which would be ours? The moose in the woods? That would totally work for a Canadian roadtrip. How about the swirl of songbirds? Not bad either.

Swung around the corner and met up with Ricky, who whizzed through our paperwork, got us oriented, then excused himself to find our assigned ride.

I tried not to look disappointed, but our paint scheme was not quite what I would have chosen for a meander through the quaint rural back roads of the Canadian Maritimes. It appears to have been executed by a Miami graffiti artist, featuring happy little anthropomorphized tools of the trade passive-aggresively tagging our van’s video-slot machine exterior on all sides. I mean, it’s a pretty cool paint job. Just…not something that suggests quietly going with the flow in small seaside towns. Has more of an um, Marlon-Brando-comes-to-Hollister vibe. 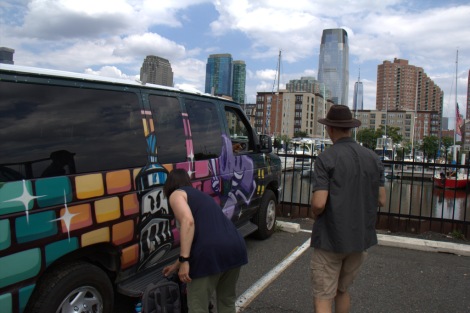 But hey – you go where the river takes you, right?  While Ricky walked us through the operation of the stove, the fridge, the graywater system, I focused on getting into the vibe of our assigned ‘do. We can roll with this. We’re just going to be extra careful not to park next to any vandalized sites along the way, lest the locals think we’re responsible and decide to take retribution into their own hands.

By the time we’d cleared the Saturday afternoon New York traffic northbound (one word: “Gaaaaaaaaahhhh!!!!!”) I was cool with ol’ Paintball. I’m used to small cars, and the Ford E150 is not a small vehicle. Driving it is a bit like flying a B-17: watch your wingtips, make lots of little corrections, and think way ahead if you want power. But it’s solid and roomy as all get-out. 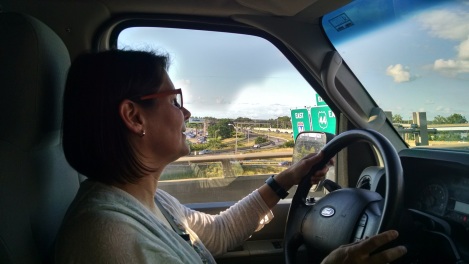 We have remarkably few plans once we dump Jeremy off at Hampshire and make a getaway. Looking forward to staying with a couple of friends enroute, and we’ve got a handful of must-sees: Bay of Fundy, Halifax, Cape Breton Island, but beyond that? Well, I guess we’ll find out, won’t we? 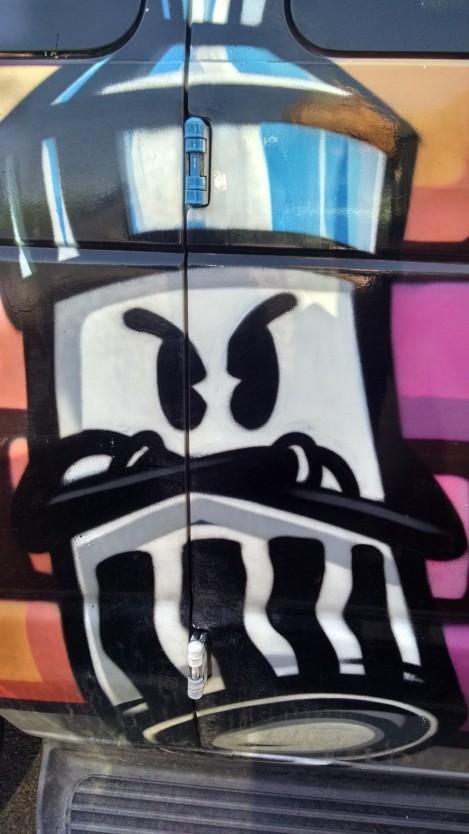 2 responses to “And Now for Something Completely Different…”