When I next noticed anything, it was dawn over the Pacific. Below, a blanket of rippling clouds stretched to the east like a bedspread draped gently over the sleeping ocean so as not to wake it. I had also slept, I guess, and we were less than an hour from Santiago.

The transition from sea to land is dramatic in Chile. One is over (apparently) endless ocean one minute, peering at irregularities on the horizon, then there’s an island or two below, a sickle of glistening beach, and then, impossibly, you’re over an impenetrable wall of glacier-clogged mountains as imposing as anything the Himalayas could throw at you. And the next minute, lush, fog-enshrouded valleys peek through breaks….

Hang on. This visually-evocative musing has been preempted by another, much-less probable one in which I’m riding in the back of a car driven by two total strangers – both beautiful women, by the way – with a mounted police escort of two motorcycles, going the wrong way down the parade route of Valparaiso’s Festival of a Thousand Drums. And I’ve only been in town for what, like 15 minutes? Thank you, Pablo-verse.

I mean, everything was completely uneventful: quiet on-time flights, surprisingly close to a full-night’s sleep on the Houston to Santiago leg, in spite of my next-to-the-last-row corner seat. Meet Jimmy (USAP’s local handler) at customs and zip through to get picked up by Manuel, who’s here to drive me the hour-and-change way to Valparaiso on the coast.

I napped most of the way into town, woken by the sound of drums. Oh, right, I’d heard about the festival. Just overlapping the tail end of it, but hey – maybe I’ll get to see a little after I’ve checked in with the ship?

But it turns out that the parade route overlaps the end of our ostensible drive. Manuel pulls over and we strategize. There’s no way in there by car, but it’s only a couple hundred meters; I volunteer to just grab my stuff and hoof it. Sure.

Several times past our estimate, dragging my gear through clots of partiers, the pier with the ship is still nowhere in sight. My phone doesn’t work, I have no actual address where the ship is supposed to be, and I’m starting to have my doubts.

By the time I make it to the Naval pier, I’m ready to ask for help. The young carabinero and his partner at the gate are happy to oblige. But neither they nor the Navy guys have ever heard of the NBP. They retreat to the guardhouse and make a few calls, then come back, parley with the carabineros, and give me the thumbs up: I’m in the wrong place, but they can fix that.

It turns out the ship is in fact only about a block from where Manuel dropped me off, but I’ve walked close to a mile in the wrong direction. Heh. But… the young carabinero who first came to my aid explains, his sister is just finishing up at the Navy pier, and she’s got a car.

Three minutes later Nicola (? I’m sorry, if you’re reading this, please correct me! I’m *sooo* bad with names!) and her friend come out, introduce themselves and gracefully chuck my 50 lbs of gear in the back of her car, and admonish me for wandering Valparaiso alone. It’s a dangerous place, she says. She’s a journalism student, and is going to be the next Ellen Degeneres, or Oprah. I can easily believe her. We climb in, and they ponder how to best get around the foot traffic, but her brother waves for us to follow him. And off we go, right down the parade route with our police escort. Crowds part and barricades are pulled aside to let us pass, and five minutes later, there I am, across the street from the NBP, profusely shaking hands and thanking my Chilean rescuers.

But yeah, to make a long story short, I made it to the ship. It’s good to be back. 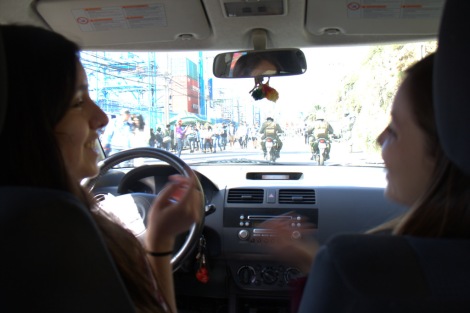