I’m sitting in the departures lounge at SeaTac, listening to the woman seated next to me loudly complain at her phone about the price of drinks in the airport bar. She’s gesticulating wildly, and I keep wondering whether to duck or just let her whack me with her hand to make a point.

It’s a different place than I’ve been these past two weeks. Granted, I’ve had my share of travels lately: Dublin, London, Accra, Woods Hole, Amherst and Boston last month. And next week I’m somewhat unexpectedly headed for Alaska. More on that later. But for the past two weeks I’ve been kicking around the farm, drinking in the late autumn air as things settle into winter.

One of the Cortland apple trees is still hanging onto its fruit, but the others have long since bared their branches. Cider’s bubbling away in five gallon jugs in the garage, keeping company with bins of potatoes and peppers. We have frost some mornings, but the cows and horses on the back pastures are still nibbling away at a cropped carpet of green brought on by September rains. The days are short – sun’s not up until nearly 7:30, and it’s usually another hour before it has pushed the fog away. Folks in town have switched to winter plumage, and long johns are pretty much assumed under everyone’s knit sweaters and wool beanies. 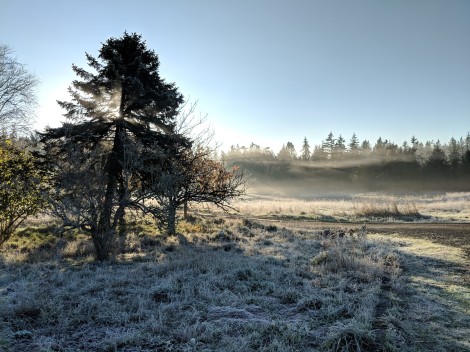 It’s a time of activity, but the activity is different from the digging out of spring, or the desperate rush of autumn harvest. People are taking time to put things in order, to check in on hatches that need battening down, to get themselves comfortable and settle into winter.

It’s a time of remembering old recipes for soup and stew, of last weekends at the farmers market, telling friends we’ll see them down at the Grange, or back up here next spring.

For us, it is, as it has been for the past year, it’s still a time of trying to chase down building permits. We’ve broken ground on the farmer housing we’ve been working on with a local designer and builder. By “we,” I mean the construction workers, of course, but the preliminary road is in, the septic dug and the foundation poured. If all goes according to schedule, they’ll begin framing right after Thanksgiving.

The actual farmhouse is still stalled in permit-land. Don’t ask, and don’t get me started. Just don’t. 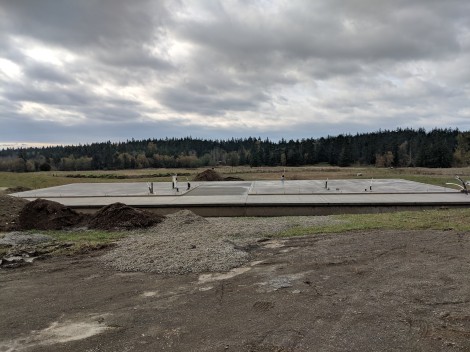 What it’s supposed to look like when it’s done

But I’ve been getting to enjoy myself. Puttering around the house and long walks through the woods, getting delightfully lost with Blue – I know those of you on Instagram must be getting tired of my mushroom pictures. Biking into town to get some waterfront coding done over coffee while looking out across Townsend Bay. It’s felt soothing, centering.

But I mentioned Alaska. Yeah. So some of you will have read about the Open Source software project I’ve been working on for the past year or so. It’s ready for its first sea trials, and the kind folks at University of Alaska have expressed an interest. It turns out that their Arctic research ship, the Sikuliaq, will be doing a short cruise at the end of the month, doing some science on its way down from Seward to Seattle. They’ll have a light workload and plenty of space on board, so I asked, and they said yes. My job is to install and test OpenRVDAS at sea and try to stay out of the way of the real scientists. Yes, of course I’m psyched. And since I’ve never been to Alaska before (yeah, I know – right?), I’m heading up a few days early in hopes of getting to spend some time with Alaska friends from the Antarctic Program.

So that’s the news. If all goes well and I don’t get injured by the lady in the next seat, I’ll be back in Palo Alto this evening, breathing in the ridiculous smoky air they’ve been living with. Jeremy’s flying back from Missouri tomorrow for a week of Thanksgiving vacation and catching up on everything he’s been missing. It’s already obvious from our Skype calls how much he’s grown in the few months he’s been away. And we’re all looking forward to having him back.