There’s always a challenge with travel writing, where you have to shirk one tenet of the genre – accuracy in tense – to convey accuracy in emotion. I want to start this post with “I’m southbound on I-5, topping the Siskiyou Summit with snow coming in sideways over the pass, the Spencer Davis Group cranked up on the radio for company.” Because those words came to me as I was in that very situation. But it felt a bit irresponsible to try and type up those words then and there, threading my way between semi rigs on the incline. And by the time I was in a quiet place where I could figurative pen-to-paper, the moment, and the sensation had passed.

But southbound? Wasn’t I headed north from Ashland? Yes, I was. And did. Made it up to the farm that evening, unloaded the chock-full-to-the-brim car into the new house and spent the week trying to find places for it all. But I’d driven Devon’s big Subaru north, you see, and Devon was in California. So by week’s end, I’d turned around and set myself to retrace the road, 880 miles southbound. It was almost an exact rewind of the trip north: saw nephew Alex in Portland again, stopped in Ashland for another play. Stopped for gas at the California border. Skipped the northbound burger at Yak’s in Dunsmuir since they wouldn’t be open for a few hours and I was eager for the road.

That was all two days ago, and somehow I appear to be northbound again. But this time in present tense, where I can type away from a comfy seat while Alaska Airlines does the driving, and a nice lady named Jenny offers me orange juice and snacks. Once back at the farm, I should be staying put for a couple of weeks, assuming no surprises. Should be. Ahahahaha…

But I mentioned “the new house.” Yeah. The new house. We’ve had a lot of plans go awry with the farm, but after three years we’ve managed to finish one of the two houses we were trying to build on the farm. The other – the one D and I had planned to live in – got stalled in permit hell and may never get built. But the so-called “County House” (because it’s on the county side of the farm) is up and running. We’re still missing some essentials: a dining room table, a place to hang clothes, broadband, chairs that don’t fold. But it’s habitable, and has been more or less my full time residence since January. Legal residence, too. After 28 years away – 22 of them in California – I once again have a Washington drivers license and voter registration.

I’m not going to try to be eloquent, because now that I’ve said “new house” I know that all you really want are pictures. So here ya go, I’ll write more later: 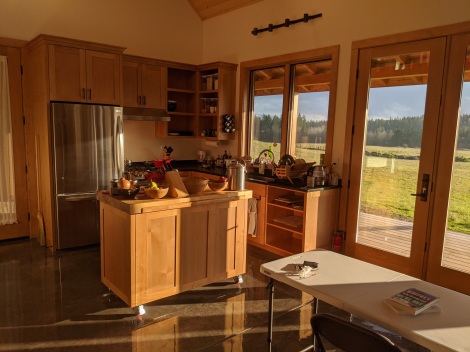 My “office” in the loft

View out the “office” window

T-shirt and Valentine printing party in the County House commons