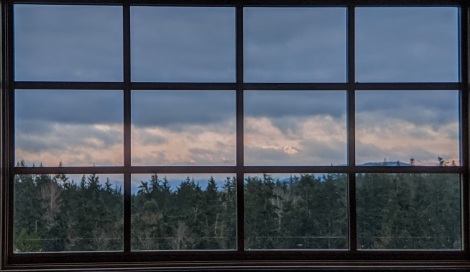 Outside my window, traces of Mt. Townsend are gleaming with first light amid folds of the blanketing clouds to the south. It’s like the mountain would rather sleep in, but can’t resist peeking an eye out from its swaddled comfort to check the clock. Yes, it’s time – spring is upon us and the sun is up.

There’ll be rain this evening, but for now it’s shaping up to be a gorgeous day. It feels a bit like I’ve been given the gift of the magi here, though – the idea of “sheltering in place” is idyllic when you live on acres of wetlands and woods. And stripped of any excuse to leave the farm, the trails just call to you. Except that, unlike the vast majority of the world, I work at home. This is my day, every day: sitting at a desk upstairs in my house and staring into that glowing little screen of sadness. Or rather, of Python code, which is often the same thing. I have my laptop and a mug of tea, while Beethoven churns in the background over the clanking of a wood stove that I have not yet entirely tamed. This could be any day for me, pandemic or not. 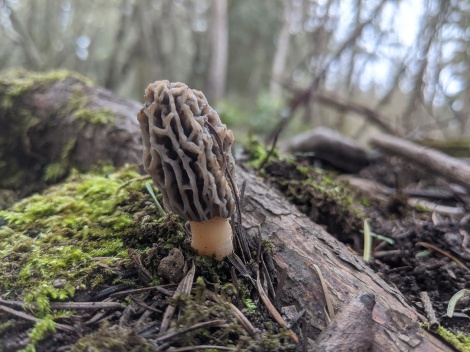 I also have a potted fig sapling that sits by the door and shares its view of the mountains with me. It’s a “rescue” fig of sorts – Andy noticed it last summer, in Palo Alto, where it had taken root in a corner of the stone wall that backs our backyard garden there. Probably took seed from the remains of a pilfered Mission fig snatched by marauding squirrels from one of the nearby trees.

But the fig’s location was inauspicious: if we let it grow, it would destroy the wall. But to kill a tree? Couldn’t bring myself to do it. So the day before I drove up with that crazy carload of California possessions, I gently washed the soil away from its stalk and pried, as gingerly as I could, its clinging roots away from the stones it aspired to destroy. Stuck it sideways in the last remaining free space in the car and had it up here and planted in a little blue ceramic pot before it could say “Ipswitch.” (No, I know – it’s a literary device. Work with me here, will you?) 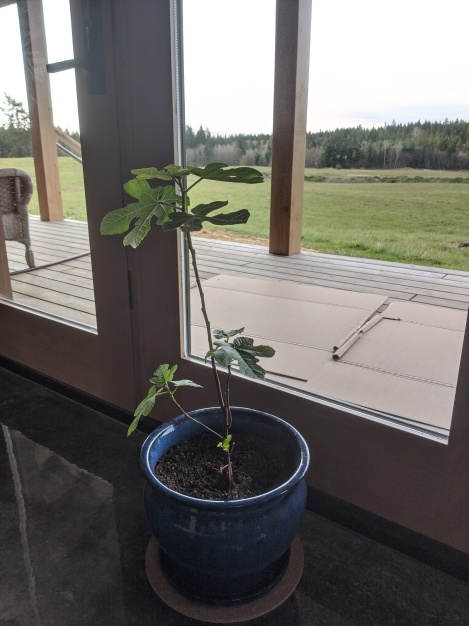 Anyhow, I call it “Miss Figgy” and it appears to be thriving. I keep coming back to the Hebrew Bible – the repeated reference to those at peace sitting “under their vine and fig tree.” It’s almost a Homeric epithet, like “rosy-fingered dawn,” as though one could not be at peace unless sitting under a vine and/or fig tree. So I’m working on the fig tree part of it. We’ll figure out the vines later. And no, Mission figs are not particularly well-suited to the Pacific Northwest. So most likely if I’m going to be sitting under my fig tree, it’s going to have to be in the dining room, and will eventually have to grapple with now-or-never decision of what to do when we realize that it’s gotten too big to ever exit the house in one piece. But I think we’ve got a few years.

You see what I’m dealing with here? Most people in the country – in the world, even – are at this moment trying to come to grips with losing their jobs, with fear of a pandemic taking them, their parents, spouse or children. How to get food into the house, how to pay for it, how to pay for anything, because the shop is closed and they were laid off. There’s a deep abyssal fear. The world is on fire. And here I am fretting over my potted fig.

Speaking of the Bible, you may recall that there’s a story there about someone who gets a bit too attached to his foundling plant in the face of large scale calamity: Remember Jonah, sitting in the shade of his lovely little vine while waiting for Nineveh to be destroyed? But they’ve repented, and God spares them. And Jonah’s disappointed when the city is spared, but he’s furious and heartbroken (“angry enough to die”) when his little vine withers.

It always bothered me that the Book of Jonah ends what feels like halfway through the scolding that Jonah gets from God for his misplaced priorities: ““You have been concerned about this plant, though you did not tend it or make it grow. It sprang up overnight and died overnight. And should I not have concern for the great city of Nineveh in which there are more than a hundred and twenty thousand people who cannot tell their right hand from their left—and also many animals?” And that’s the end of it. But what happens after that? Does Jonah himself repent and go volunteer in the Nineveh soup kitchen? Does he head back home and start a non-profit? Take up swimming lessons or horticulture (maybe cultivating a strain of theologically resistant vines)? What does he do with that divine upside-the-head-smacking he gets?

But honestly, I’m a little scared. I learned that the food bank in Port Hadlock needed help packing donations yesterday. I punched the number into my phone and wavered a finger over the “call” button. But I couldn’t bring myself to hit it. In my mind’s eye I saw a crowded room of people picking up, putting down, taking out, putting in. The occasional cough or sneeze. A room full of people with unknown exposures and unknown levels of skill and regard for anti-virus hygiene. I couldn’t do it.

Yes, we’re donating money left and right. I’m checking in on our neighbors around the farm and periodically ordering takeout for “the kids” who live at Natembea (feed them, inject a little money into the local businesses). But it feels too removed for a calamity of this magnitude.

Devon forwarded me an interview with David Kessler (“That Discomfort You’re Feeling is Grief“) where he makes the assertion that we, the “self-help generation,” are the first to have feelings about feelings: “I feel sad, but I shouldn’t feel that; other people have it worse.” He calls for us to have a little more self-compassion, saying we can (he uses the unfortunate “s-word” – “should”) stop at the first feeling:  “I feel sad. Let me go for five minutes to feel sad.”

The discomfort I’m feeling is guilt. I’m trying to have a bit more self-compassion for my guilty feelings here, but even that has the taint of sounding like privilege. A bit too much of the “It was dreadful – we were all out of sherry and had to resort to some dreadful Canadian stuff. But these are desperate times!”

As I said, I don’t know where I’m going with this. I usually manage to wrap up my blog posts with some pithy conclusion, but that’s not going to happen this time. The clouds have moved in, and it’s drizzling lightly. I’ve got coding to do, and a videoconference at noon to prepare for. I have to put together some text for a conservation grant application and pull down the latest bank statement for our farm spending. I have to go about my quiet little life while the world burns. I probably need to water the fig.

7 responses to “Sheltering in Place”