Not the traditional road trip, this one, but a trip back through time.

This past Friday night, a bunch of my co-workers and our respective spouses left our respective kids with respective sitters and went out dancing. The band was San Francisco staple and blast-from-multiple-pasts, Tainted Love. Back when Google was big enough to throw a big party, but still small enough to fit that party in a single building, TL used to be hired to at the Christmas, er, “Holiday” party, the annual ski trip, and any other occasion that called for loud music and thrashing bodies.

TL is an 80’s cover band, and a damned fine one, reproducing not only the sound, but the look and feel of Joan Jett, Madonna, Duran Duran, and well… they do it well. And unlike most of the folks I work with, I know, because I (along with the rest of our contingent) was old enough to have danced to this stuff the first time it came around.

That night, the Fox Theater was a surreal mix of old fogies like us and twenty-somethings done up in their convincing 80’s best. Unnerving – the awkward, gangly twenty-something of my past was cowering somewhere in the corner of my temporal lobes, begging not to have to go through it all again. But the calm 46-year-old in charge of the cerebral cortex said “Hey – we are so far beyond that anymore; we’re just here to dance.”

And dance we did. Great fun, now that I could look at it all through the (bifocal) perspective of 25 year’s time.

Somewhere near the end of the first set, TL launched into “Jessie’s Girl”. Not very danceable, not even by 80’s standards, so I excused myself from the gang and headed to the lobby for some air. I was feeling good, I was feeling not so old after all – but I wasn’t prepared for what happened next.

A young woman squealed “Oh my gosh!”, grabbed the woman next to her and came rushing at me. In less time than I could react, one was on each side of me, arms around my back, leaning into me like they were posing with a celebrity they’d ambushed. I looked up, and there was a third, camera in hand ready to shoot.

“Oh, oh oh, can we pleeeeeeease take a picture with you?” She implored, then hammed back to the camera at the presumed “yes”. I hadn’t said a thing – I was still completely paralyzed by confusion. Judging from the flash, they’d gotten a few shots before I managed an entirely unsuave “Uh… sure. But….?”

Her friends pulled her away, along to whereever they’d been going before they spied me. As she disappeared into the crowd, she looked over her shoulder and called back “Don’t worry – it’s a good thing! I promise!”

But this nostalgia for the 80’s is somehow heartwarming. Back when I was a kid, we had “sock hops” and spun records from the 50’s. So there’s a certain comfort in understanding what’s going on, and – what’s more – being an actual authority on the period in question.

I remember back a couple of years ago, when Christophe and a handful of my other half-my-age coworkers used to live together in a place up in the hills that had been dubbed “The Big House”. Every month or so, there’d be a theme party at the Big House, and Christophe was particularly excited when he told me that the next one was going to be an 80’s party. “You know – Miami Vice, skinny ties, dark shades, the works. You were in the 80’s, right? You can show us how it was really done!”

I didn’t have the heart to tell him.

But I’m old enough to know that I have to be true to myself, so I pulled the old boxes out from garage, dug through and found what I was looking for: one of the actual shirts I wore back then. No, not just “one of” – my favorite shirt from that decade of my life (why else would I have it?). And in another box, a photo of me wearing that shirt, in 1982. 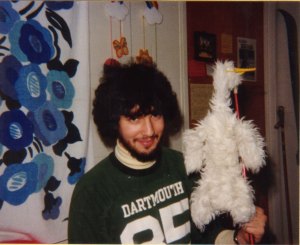 As I drove up to the big house that evening, I knew what was going to happen – I just didn’t know how. Still, I had to be true to myself. The party was in full swing, a wild crush of noise, lights and bodies, but Christophe spied me soon after I made it through the door.

He looked me up and down, uncomprehending. He was clearly searching for the right words, so I spared him the trouble. “You wanted me to dress like we did in the 80’s, right? Well, this is how I dressed.” And I handed over the photo. Comprehension dawned, then turned to a look of pity. He nodded slowly.