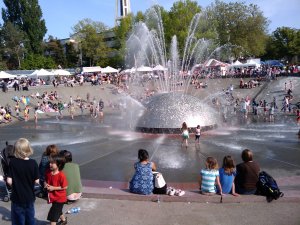 If you’ve ever spent the weekend up in the mountains camping out at one of those 60’s hippy-esque freeform music festivals, it’s pretty easy to describe what Folklife is. Exactly that, but smack dab in the middle of Seattle. If you’ve not spent a weekend that way then, well… you’ll have to use your imagination.
I’m in town on business, giving a couple of internal talks at our Seattle/Kirkland offices. Hadn’t even been thinking of Folklife, even though – back in my twenties, when this town was home – I looked forward to it each year.
But we packed the first two days of the Mem Day weekend full of friends and family activities, and by Monday the kids told us they just wanted to veg out all day. I’ve never been good at vegging, and somewhere in the back of my head, a lightbulb went on. “Uh, dear…, if the kids are just going to be hanging out, I just realized that Monday’s the tail end of Folklife, so if I went up a day early, I could…”
She cut me off: “Bye!” (Okay, it wasn’t quite so theatrical, but that woman truly knows proper care and feeding of her husband.)
Filed an IFR flight plan up the I-5 corridor and covered the distance up to Seattle in just under four hours. Picked up a rental car at Boeing Field, and by 3:00 I was wandering through the tie-dyed, bodypainted, drum-pounding masses, guitar slung over over my shoulder, looking for a place to set down and play.
Which was harder than you’d think. Most every square foot of turf on the lawn was taken up with folks hula hooping, drumming, eating, singing, and uh… expressing their affection for each other. And where you could find a place to plunk down, there was music enough coming from at least two stages and half a dozen impromptu jams to prevent you from hearing the sound of your own voice.
I didn’t feel entirely into the groove enough to join one of the existing jams, so I wandered away to the fountain, where I found a relatively quiet spot to pull out the guitar and start plunking. Mostly my own tunes, singing out to pretty much noone, and feeling a part of it all. A couple sat down next to me with their picnic; I flattered myself that they liked the sound. While trying to figure out what to play next, a kid approached and asked about the guitar: what kind of guitar is that and, can I play it for a bit? Sure! Apparently they don’t have Baby Taylors up here, because that was the main question I got – felt a little like a Taylor salesman handing it around.
He played for a bit, said thanks, and melted back into the crowd.
It was a good spot to sit. Not crowded, but the constant river of people going from Points A to B and back gave me a feel for the flow. A surprising number of kids of both genders, body-painted and singing, waving “Free Hugs” signs and enthusiastically embracing each other and willing passers-by. The drifting Deadhead crowd. The Cool Dudes on the Make (looking not entirely sure they were in the right place). The ethnic musicians of every stripe. My favorite two: The Ragstompers – three disheveled dreadlocked kids from Oklahoma playing resonator guitars and a real-live washtub bass, throwing out tight harmonies on what I’d have to call hard-luck hillbilly gospel. And the Russian folk ensemble in traditional garb, accompanied by hurdy gurdy, musical crowbar (think heavy-metal version of musical saw), and a drum kid that would make Keith Moon drool. This, truly, was Folklife.
The big thing about this – what makes it so diverse – is that fact that the entire thing is volunteer. None of the musicians are paid to be here. The ones up on the stages were invited, but everyone else has just set up busking or just showing off in whatever corner of the park they’ve been able. Most have a hat out in front of them. Many are trying to sell CDs. Some, apparently, are just trying to get laid.
Me? I was just there to feel the vibe, and it was a good one. By the time I headed off to Lauren and Ruben’s for the evening, I’d also jammed along with a couple whose hair was festooned with purple feathers (he was a luthier, she was… from another planet) and a quiet, pink-haired, heavily pierced kid who lamented that, while he loved Queensryche, “all the really good music” was written back in my time, before he was born. I’d witnessed, and participated in a massive, chaotic, messy organic – for lack of a better word – “happening” with roughly a quarter million total strangers, and floated home in my “Pablo’s got his groove” mood, feeling like I’d had my right little adventure. And gotten a dose of Folklife that would have to keep me until roughly this time next year.