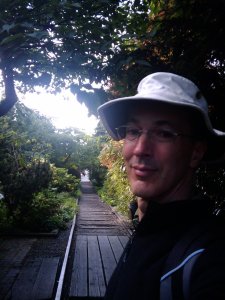 Patty Larkin’s song “Helen“, paints the picture of an aging matriarch lamenting the changes that have come to her beloved rocky coastal down Maine, 40 miles from the Canadian border. “The ones movin’ in they’re all from away” she laments.
These days, when someone asks me where I’m from, I often have a hard time coming up with anything better than that: Away. Yeah, at various points I grew up in North Carolina, Michigan, California and Denver. Then New England, Seattle, Boston, and a couple other places under my own steam. In a way, I’ve called each one of them home, but I’ve never been “from” any of them. Where am I from? For lack of a better place, “away”.
Back in Seattle for a few days. Ambled out of the office, across the Fremont Bridge (god, I love drawbridges), and up the tangled mess of lush green alley ways that lace north Queen Anne Hill. Good to be home – one of my many homes. I’d never been right there before, and had no idea where exactly I was going, but it didn’t matter. The verdant overgrown sprawl of the hillside dirt paths – blackberries and horsetail underbrush rising as if to envelope the narrow space between footpath below and wild maple above; as if to swaddle the air itself in an embrace of springtime.
I found myself by the waterside at Westlake, along a footpath of old railway, now reclaimed as what passes for sidewalk for the houseboats in Queen Anne’s shadow. Not a place I’d ever been in this city, back when it was my city, but it made me homesick at the thought of leaving it. 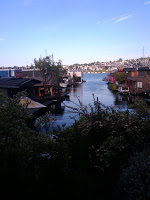 Funny that. When I first came to Seattle, back in 1985, I’d fallen in love with the city at first sight. Looking out that morning across the sparkling ferry-tressed Sound to the snow-clad sharktooth mountains in the west, the morning just said “Welcome home, son”. Of course, back then, nobody went to Seattle. “Doesn’t it rain something like 300 days a year there?” “Got a good umbrella?” I might as well have been moving to Manitoba. (No offense to Manitobans; it was just another place that – for most people – was no more than a name they’d heard and couldn’t quite place on a map. It was, uh, over there, somewhere.)
Still, I fell in love with the city. And with every place I’ve lived and loved, I mourned leaving it. In my absence, it briefly shone as the epitome of coolness – Starbucks (before it was big) and Kurt Cobain. The birthplace of Grunge. Yeah I was there, dancing in basement clubs to The Young Fresh Fellows, drinking cheap Rainier. I moved on – a postdoc position in Boston, marriage, a real job, kids, and life rolled out ahead like a winding road.
But Seattle’s always been a special love – that old flame that knew you too well from back when. That friend that you can sit up late with talking about old times and how crazy you both must have been.
Tonight I took a walk with this old city of mine, and as the sun crept down, we had a grand old time, sharing memories of back then, and thinking how good it felt to be back from “away”.