I’ve been grasping at any metaphor that can explain what makes this city so special for Americans. Something that doesn’t make us mere cowboys running amok over a refined civilization that would rather we just left it alone. Because there’s something there, something like John Lennon riffing crazily on Paul McCartney’s staid melodies.
Call it a cultural mashup, if you like, but don’t spend too much time trying to analyze it, or you won’t be able to let yourself slip into its groove.
Dragged my jetlagged body out of bed at 8:30 this morning and spend the time up ’til noon chatting w/S and (of course) eating breakfast, snack, lunch, maybe second breakfast… before skipping out for some wandering. Made my way to the Paris branch of Google to say “hi” from the mothership and see if there were any engineers who wanted to talk shop. Pretty much everyone except Elena was either buried in their monitors or off on vacation (France, August – to be expected). But Elena’s not French, so she was there, and happy to let me waste her time over coffee, numerical optimization, and tales of Life Over Here. Hammed it up with some photos in the obligatory Louis XIV chair. Great fun.

Excused myself after an hour or so to let her get back to work, and to try to make it to the Orangerie before it closed. Used my spidey sense to navigate from point A to point B through the Tuileries, and was relieved to find the museum open for business. Last time I was in Paris we were zero for three attempts on museums, so I wasn’t counting on anything. Did I mention it was 97F here today? Yow.
Got a good dose of my favorite impressionists, then set off to find my way home on the Metro.
Wild thing about wandering Paris is that I found myself actually Thinking In French. It was such a strange sensation. I knew I could do it twenty five years ago, when I lived in Lyon, but that was a lifetime ago. Now, it came out of nowhere. It must be like what magic would feel like if Harry Potter were real. You just focus your mind, let go, and suddenly you’ve turned invisible. Or French words are coming out of your mouth, expressing ideas in your head with no other language intervening. 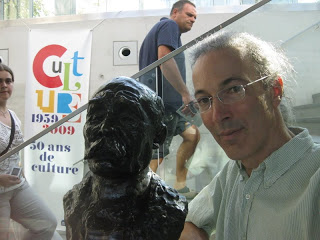 That being said, it also felt a little like what it must feel like to have Alzheimer’s – I’d keep getting stuck midsentence, with a vivid picture in my head, but having failed to summon the proper word to name it. It wasn’t that I couldn’t find the corresponding translation – I couldn’t name *any* word for it. And then I’d stumble, start thinking in English again, retrieve the proper word, and ask “En Francais, comment est-ce on dit ‘lint brush’?”
But I swear – the thinking-in-French thing? It felt like weird magic.