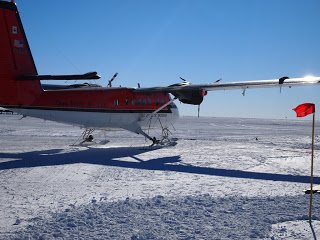 Sound of a Twin Otter warming up its turbines out on the apron. Bob, Andy and the AGO team were supposed to get dropped off at one of the remote field camps out on the Siple Dome a couple of days ago to set up their geomagnetic measurement station. Very cool stuff they’re doing: as solar flares push up against the earth, the magnetosphere that protects it gets buffeted around like a balloon. It (the magnetosphere) is thousands of miles above the atmosphere most places, but comes to earth at the poles, so as it gets pushed around, you can measure the change in flux here on the ground.

Anyhow, the AGO team has half a dozen remote sites in the barely-charted interior of the continent where they go out and set up these devices. It’s something to think about: this continent is about the size of North America, and there are plenty of swaths as big as Texas where no human has ever set foot. The AGO team gets pretty close, though.

But I saw Bob early yesterday, looking vaguely beat. They’d gotten out to the first AGO site and couldn’t land – Otter had made a couple of passes, then given it its best shot at setting down. But after clattering along the uneven drifts for a thousand or so feet, the pilot thought better of it, gunned the engines and brought everyone home.

Ran into Curtis, one of the younger AGO scientists, in the hall after dinner. “Hope I don’t see you again tomorrow, eh?” seems to be a common envoi around here. Better luck tonight?