Sunday – our one day off each week. A day to lie in bed, to kick back. To sleep in. Except that someone in our Jamesway let their alarm go off at 5:00 a.m. And then 5:05 a.m. and then… Every. Five. Minutes. Until. 7:30.  Ahem.
Okay. But things were sharply uphill after that. I’d grabbed a copy of Paul Siple’s brilliant “90 Degrees South” from the library last night. Siple details his participation in the early Little America expeditions, and his selection to head up the science side of Operation Deep Freeze – the scientific/military mission to establish the first permanent presence at 90 Degrees South. Yes, Old Pole. (By the way, the first structure erected at the South Pole was… wait for it… a Jamesway.)

By about 10 p.m. last night I’d dug a quarter of the way into it, eschewing the famed glitz and drama of “James Brown Bingo” (now in its 10th season!). I did stop by, and it was definitely, as the saying has developed here, “a thing”. But a bit loud for me, and others, apparently. Katherine’s assessment: “I think it works a bit  better if you’ve been drinking more.” 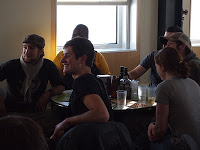 Right. But this morning, made it over to station to run on the treadmill – still not as brave as Marco, who actually does his running outside on the skiway. Then a nice long (two minutes and five seconds) hot shower followed by brunch (lost entirely in Siple’s book).

Met Zondra at noon for a cross country skiing loop out to “SpoolHenge” near “The Chariot at End of the World”, then up Meagan’s Hill for more sledding. Z needed someone to document her actually skiing the hill, then we headed “north” around the station to the respective geo and ceremonial poles.  Had the obligatory “Race around the world” – Z won, but she hogged the inside track, so I’m asking for a rematch. 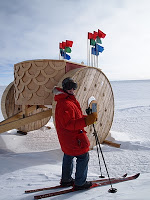 Tonight it’s Sci Fi movie night (Independence Day), but I’m probably going to stick with Siple. It’s a crazy, amazing story, and you just can’t make this stuff up (we have on station John Rand, who is believed to be the only person alive who’s lived in all three stations: Old Pole, the Dome and the Elevated Station. Have gotten to talk with him a bit, and it’s clear that he’s got tons of stories).
Speaking of which, it’s my third Sunday on station, so it’s time for the third iteration of “Questions for Pablo at the Pole“!

“What do your kids think of you being so far away?”
Ruth, Walsenburg
Kids are still proud of me being down here. You get serious bragging rights around the playground when your dad is working at the South Pole. But it’s tough on them, and on their mom. I do call every few days (need to time it when they’re around and satellites are up), and email a bunch, but it’s really tough on them, and I’m proud of how well everyone is doing. If all goes well, I’ll be superfluous by the time I get back home.

“Did they train you beforehand to troubleshoot laptops? Or are you just winging it based on years of random experience. Also, are they mostly Windows, or Macs or Linux or a mix?” Sharon
Heh. No training, aside from a day and a half I spent at RPSC headquarters getting introduced to the systems the USAP uses – Active Directory, Mapcon, CTS, Track-It. I was actually terrified about all this before showing up, but Bill – my manager and the guy who hired me, explained that, for the most part, I wasn’t being hired for my technical skills. My main asset, he explained was my apparently impervious cheerfulness, which I’d need as the first point of contact for anyone with an IT problem. In the three weeks I’ve been down here, I’ve learned to personally field about 1/2 of the problems that hit the helpdesk, but Bill was absolutely right: the bulk of my time is being a bit of an IT therapist – talking with users, helping them clarify what their problem is, and figuring out whether I need to hand it off to Ben, Dan, Kevin, Kyle or Mike, the folks who really have the hard skills to fix things.

Machines here are mostly Windows, with a smattering of Macs. Very little Linux, except among the beakers (the visiting scientists), who tend to know their own systems well enough not to need help.

“Do you guys have domestic furry critters (dogs, cats, rabbits) at the Pole?” bluesdiva, san jose,
Alas, by the Antarctic Treaty of 1961, no pets, or non-native animals of any kind are allowed in Antarctica. Way back when in the days of Amundsen, Scott, Shackleton and Byrd, folks brought tons of dogs and ponies as work animals. But they’re all gone now. Plants too – we’re not allowed to bring anything living onto the continent. There are all sorts of crazy restriction on how we get seeds for the greenhouse; when I asked Joselyn, our greenhouse tender, she got this “Oh god, don’t make me relive the painful process now!” look.

Speaking of the greenhouse, here are some more details from the official lit: Our greenhouse is hydroponic, and was built in conjunction with the U of Arizona who can actually run it by computer from their lab in the states. They can control the waterflow, nutrients and other things like Co2 levels. It was originally meant to produce lettuce and cucumbers, but has been producing other veggies too. About every other day it produces enough greens to feed 250 people, and last year produced 1154 pounds of fresh produce across five crop classes. Believe it or not, it is the test bed for the Lunar Greenhouse under construction at the U of AZ Controlled Environment Ag Center.

“Has anyone written a pole chantey? If so, is it any good?”

Emily, Bainbridge Island
Hmmmmm….. Lemme get back to you on that one :)