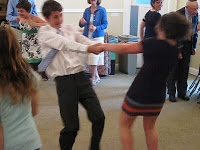 I’m dancing “Hava Nagilah” with the Catholic mother of my ex-girlfriend. At a Bat Mitzvah in a Buddhist temple. I’m having the time of my life, and I know that to make up for it, there’s a potted petunia plant somewhere high above the stratosphere that’s about to have another bad day.*

*(If the Douglas Adams reference stumps you, stop reading this blog and pick up Hitchhikers Guide to the Galaxy. Sit down and read it.** Really – it goes quickly and your life will be much better for it. Certainly better than if you just kept reading this blog.)

**(At least the first three books – honestly, after that I think it starts getting a bit dodgy, and you might want to switch over to the Dirk Gently series. But definitely the first three, and you can save yourself the trouble of that stitched-together collection of posthumous stuff.)

Anyhow. If the “potted petunia” bit didn’t stump you, but the ex-girlfriend’s-mother-buddhist-bat-mitzvah thing left you puzzled, welcome to my highly improbable life. Okay, not “improbable”, just… well, not what you’d expect. Some time ago, when I remarked on an “against all odds” event in my recent past, one of my wiser friends corrected me: “You mean ‘against all normal people odds’. The Pabloverse has clearly established itself as differently organized.”

So it’s not improbable, or even highly unlikely, if you know me well enough. Let me explain: If you do know me well enough, you’ll know that I really, really, really want to be thought of as a nice guy. Yes, it’s a character flaw, but it’s my character flaw, so I have to deal with it. And dealing with it is really hard when you come to the subject of being an ex-boyfriend.

Face it: we’re all lousy boyfriends and lousy girlfriends as we grow up, and it’s through the process of inflicting unintended emotional trauma on each other that we learn to be good ones. With luck, we don’t marry until we’re fairly well along in the process, so that our spouse (hi Devon!) never realizes what horrible people we used to be.

It’s this awareness that got me, some time ago, into the otherwise inexplicable habit of looking up old girlfriends to apologize. Really, just that: “Hi, it’s me. Doing fine, thanks – yes, married, two kids, living in California. And you? Great! So, mostly, I just wanted to let you know that now, in retrospect, I realize that I was a complete @#$^$% back when we were dating. Yeah – sorry about that. Thanks for being so understanding. Okay, cheers – good talking with you. Bye.”

Does this make me weird? Is this some sort of infantile obsession? Doesn’t much matter – it’s all part and parcel of my favorite character flaw, so I have to deal with it. Besides, by now I’ve pretty much tracked down the entire list of people I remember being awful to, and I feel a lot better about myself for it. (If you think I’ve been unrepentantly awful to you – whether or not we’ve dated – please drop me a line off-list and I’ll see what I can do about it. We’re coming up to Yom Kippur, so I’m working on some bulk emotional absolution.)

It was only about a year ago that I finally had the nerve to email Mary to apologize. The longer you date someone, the more chances you have to be awful to them, and Mary and I had dated for a long time, so there was plenty of awful to apologize for. But I did a little bit of Googling to track down her email address and wrote a note (Point of concern for Ms. Manners: is it appropriate to apologize for cyberstalking someone if you only did it so that you could contact them to apologize for other stuff?***)

***(Remind me, some time, to tell you about the handwritten thank-you-and-apology note I have from Ms. Manners – that story is as good as it sounds)).

Anyhow – Mary wrote back. She was living in Seattle with husband Fred and two daughters; I should let her know when I was next in town, and we’d go out to dinner to do introductions and catch up.

Did all that. Fred is a complete sweetheart – witty and kind and gracious (remember that he’s having dinner with a guy he’s probably heard horror stories about). The kids are smart and spunky as all get-out. Turns out that Em, the oldest of the two, is studying for her Bat Mitzvah. Going to be Labor Day Weekend, 2011 – Fred tells me I should bring the family. All goes on the mental back burner until, well, here I am, dancing Hava Nagilah in a Buddhist temple.

The rest of the gang is here, too. It’s like a college reunion with the people I knew from after college. From all those crazy times when we were young. Liz and Alex are still together, and they’ve got a hellaciously fun, outgoing redhead boy that I need to introduce to Jeremy. Janine and Gabrielle. Only Mark and Susan are missing – they’re living somewhere out east now. “Aunt Linda” (Mary’s kid sister, and source of constant torment when we were dating – she, at least, was under no illusions about what a bad boyfriend I was) sidled up and poked me in the side, the way she used to do back then to say “Hi”. Said that a few weeks ago, she’d told Em a “Pablo joke” and Em shocked her by saying “Oh yeah, I know Pablo.” No, I didn’t have the courage to ask what a “Pablo joke” was – really, some things you’re just better off not knowing. But she gives me a big hug and a nodding kind of smile. The kind of smile that said “It’s cool – we were all @#$^$%s back then, weren’t we?”

Then the music starts up again, and the guys over in the center of the room need help doing the “lift kids on the chair and dance around with them” thing. Yes, traditionally that’s what you do with bride and groom at a Jewish wedding. Traditionally. But the kids are squealing to be lifted up and danced around with, and “tradition”? Remember the bit about the bat-mitzvah-in-a-Buddhist-temple. The whole thing is a cultural analog of molecular gastronomy, where, if you do it right, you can take an eclectic collection of highly improbable – even instinctively incompatible – ingredients that have come together in a way that, well, just works. Well, Mary and Fred have done this right, and it’s working – it’s working wonderfully. Even if, somewhere far overhead in low earth orbit, a pot of petunias is about to have a bad day (Read the books, okay? Just read the books).