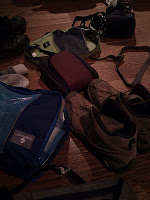 So…. Liberia. Yeah, the reactions I’m getting are pretty bipolar. They’re either “That’s so freakin’ amazing – how on earth did you get picked for something like that?!?” or “Why on earth would you want to do something like that?!?” Nothing in between those two extremes, which, I guess, makes sense – the phrase “I’m going to Liberia next week as an election monitor for the Carter Center” plants a point that’s statistically a bit extreme in terms of demographic unlikelihood. On par with, I suppose, “I’m going to abandon friends and family for a few months to work at the South Pole.” Point taken. And the questions I’m getting in response are about the same. The thing is, in this case, I don’t have so good an answer to either.

“How” is easier, I guess. Devon and I have been supporters of the Carter Center (“TCC”) for a couple of years now, ever since they helped me out with a Liberian public health project proposal I’d been asked to evaluate. I didn’t know the first thing about Liberia or public health, they knew both intimately. I’ve also been talking with them in the capacity of my “day job” – I was studying how mobile phones could be used to help field workers gather data, and they were trying to figure out how to use mobile phones for monitoring elections, among other things. Good match.

TCC deploys two kinds of observers in elections: long-term observers, or LTOs, get there a few weeks before the event itself. They work on getting, for lack of a better term, the mood on the ground. They attend rallies and follow candidates around. They tend to be skilled professionals with a nose for what it looks like if something’s awry – maybe a candidate is looking like they’re being threatened. Maybe a candidate is hinting at violence if, say, “the peoples’ will is not respected.” (Remember, it’s always about respecting the peoples’ will, isn’t it?) Anyhow, these guys are the pros.

But for the period immediately before and during the election, TCC needs broader coverage. When the actual voting starts, they need to see what materializes – are people being turned away at some polling stations? Is there intimidation? Are there complications with the ballots, not enough, or how they’re being stored? Is the chain of custody respected, handing the boxes from the polling place to federal election officials? Is Diebold involved in any way? (sorry, cheap shot there). For these bits, they want as broad coverage as they can get. And it doesn’t require a particularly trained observer to provide that coverage. After all, as Peter Gabriel, the founder of Witness.org (and yes, rock star) observed: “People tend to behave better if they know they’re being watched.” So TCC also deploys a swath of short-term observers (STOs) a couple of days before the election. In contrast to the sophisticated, nuance-detecting LTOs, STOs may be relatively um, untrained. Like me, for example. We’re going to get a couple of days of training in Monrovia once we land, prior to deployment, and then it’s off to the bush.

The Carter Center’s been doing this for years, though, so they’ve got this training/deployment process down to a science. That being said, I don’t know how much I’ll be able to report back while I’m on the ground there – remember that Liberia’s got pretty much no running water or electrical grid, let alone decent internet connectivity. So it’ll very much be catch as catch can when I can get somewhere with a signal. So the blog may go dark for a bit starting Oct 5th. Don’t worry – I’ll be taking notes and writing as I go, and it’ll all go up as soon as I get back and recovered from whatever Icky Tropical Diseases I’ve picked up there (kidding about the ITDs, I promise!).

…
Eh, okay, sorry – this hasn’t turned out to be a scintillating, clever, or even particularly informative post. I’m excited about this, really. I’m also tired – been trying to get too many things done at work prior to leaving, and not sleeping particularly well. Somewhere in my dreams, a mackerel wearing a top hat will offer me ear plugs, and I latch onto the significance of the event: Ear plugs! I must remember to pack ear plugs!  Then I roll fitfully for the next few hours trying to grasp on to the slippery idea, straining against the limits of my unconsciousness. Until I wake up at dawn, more exhausted than I was when I lay down, and turn to Devon: “I had the strangest dream: for some reason, I thought it was vital that I put a mackerel in my luggage and bring it to Liberia…”