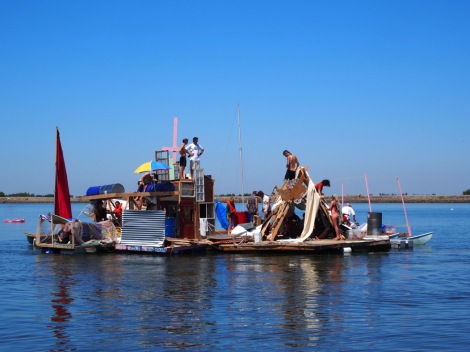 The best brief description was that it was a shanty town. A shanty town floating along the Sacramento River Delta. Manned by young hot pirates. With power tools. Oh, and a flamethrower. Honestly, I never did get the full explanation, but that’s probably close enough to fact to serve for whatever narrative I can come up with. 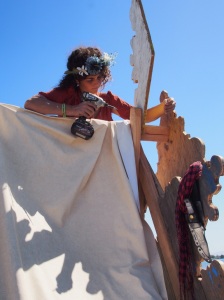 They came around the bend at Mandeville Point in the early afternoon. From a distance, it looked like a random agglomeration of anything they could keep afloat and, as they got closer, it became clear that that was exactly what it was. Onboard, a dozen young men and women, deeply tanned and beautifully honed, climbed barefoot on the haphazard wooden structures driving three-inch wood screws through everything to hold it together. Nails and sharp pieces of scrap metal were strewn about whatever flat places still held them – I have no doubt there was also a trail of them on the river bottom, stretching back around the bend from where the unlikely crew had come. 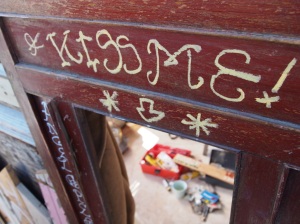 Some of the construction crew paused in their work occasionally to climb parts of the rickety structure and leap off into the water. Sometimes the structures overturned or collapsed mid-climb, and the air was briefly filled with two or three scantily clad whooping, shrieking bodies, followed by a quick succession of splashes, and laughter as the climbers emerged among the capsized wreckage. There were air compressors and generators lying around, nails, torn edges of metal and splinters the size of a dinner knife sticking straight up. There was talk of a flamethrower that had been left somewhere. If you were an OSHA inspector and went to hell, it couldn’t look any different than this. 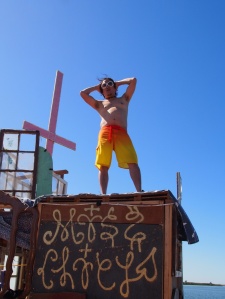 We grabbed the dinghy from the back of Breeder and paddled over, asking permission to come aboard to pay our respects. A tall dark Cleopatra, wearing only Egyptian headdress and bikini bottom, briefly waved her cordless drill over at the direction we should dock, then went back to screwing stuff together.

On board, it was brilliant, beautiful, inspiring and terrifying. Even the nominally-horizontal structures, held afloat by 55-gallon oil drums, were in constant danger of overturning. A couple of us tourists – yeah out on our rented houseboats we had felt like we were the Real Thing, living on the edge here in the Delta, but weaving our way around Salt (this, it turns out, was what the shantytown was called) we felt like tourists, posers. But a couple of us tourists tried lending a hand – helping push a newly-constructed bit of crap over the edge to see if it really floated (it did), and trying to help bail some other parts that didn’t. 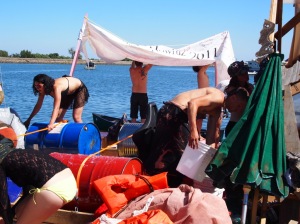 Between bailing buckets and bucket brigades of moving piles of crap from one place to the other, we managed to get a little bit of the back story. These guys were a biker gang from Los Angeles. No, not that kind of biker – the kind with pedals and skinny tires. When they weren’t biking they got together to do other stuff. Like, for example, travel to Northern California to build a catastrophically scary floating shanty town and see if they could navigate it far enough down the river to join up with Ephemerisle. Achievement unlocked.

In the end, we didn’t stay long. Even amid the random chaos, there was a clear intent and purpose to the motion, and we felt a bit like audience members who had stumbled onstage during a play. We weren’t unwelcome, but we didn’t belong – it was better that we observe from a safe distance. 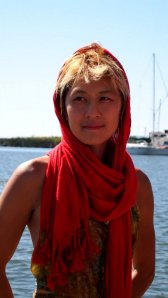 And so we did. Construction – if that’s the appropriate word for the activity – continued throughout the afternoon, as did the sounds of splintering wood, shrieks, laughter and splashing. At dusk, fireworks lit the sky, punctuated by breathtaking blasts of heat and light that illuminated the surface of the water and engulfed some of the platform structures that had been set adrift. Apparently, the hot young pirates of Salt had found their flamethrower. 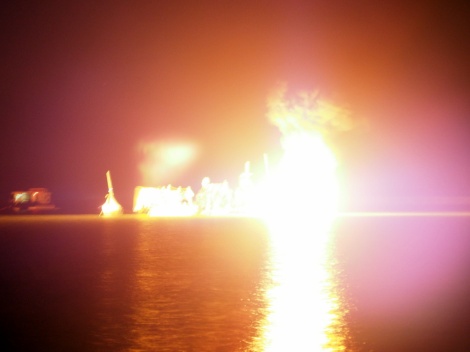 One response to “Salt”