We made it into Punta Gorda just ahead of the rain. The real rain, that is – we flew through a shower or two on the way down, but by the time we’d buckled down the bits on Nine-O-Nine and hauled out the traffic cones, ropes, folding tables and three elephants (okay – I’m kidding about the elephants, but you can fit a hell of a lot of stuff in the belly of a WW2 bomber), it was really coming down.

Witchcraft – the B-24 – came in half an hour behind us; she’d done one paying ride up at Sarasota before following us south. As usual, Mike, a.k.a. Mike-the-Russian, a.k.a. “Boris”* stood half out of the top hatch as flight engineer, watching wingtips and relaying his interpretation of the ground marshal’s taxi directions to Carl. He was getting soaked, but you know there’s no place in the world he’d rather be. 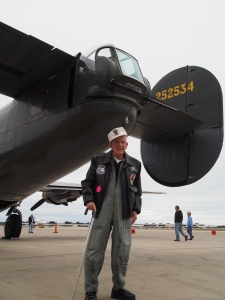 Witchcraft had brought along a “transit” load of passengers – folks who, by special arrangement, had signed on for the one-way trip. Transit passengers do tend to be special- before the flight I’d gotten the chance to talk with CMSGT Lee Chalifour, 88, who’d spent most of his B-24 time as a tailgunner over Italy. “Thing about being a tailgunner is you could only ever see where you’d been.” He was unsteady and leaning on a cane when he climbed aboard, but word is that once they were airborne, he scrambled into that tiny little turret “like a monkey”. I just know that when I helped him disembark after landing, he looked like he’d lost twenty years of age during the half-hour flight.

And Harold Plunkett, 91 – he met us down in Punta Gorda with his scrapbook and pretty much took over giving the B-17 tours for us. He’d been a ball-turret gunner over North Africa, flying 82 missions and getting wounded twice (“Only got one Purple Heart out of this though – first time I didn’t bleed, and they only gave you the Purple Heart if you bled”). Sure it was cold and raining – locals said they’d never seen so much rain – but Harold didn’t mind; he went up and down those ladders and through the hatches telling one story after another. And I desperately wished I had brought something with which to record it all.

But the rain – we didn’t have many visitors because of the rain. People want to come out to an airport on a bluebird day like we had two days ago, but when it’s coming down like that, they’d rather just stay home. I don’t know what we would have done without the EAA chapter 565 – they offered up their clubhouse as a meeting room and PX. What few folks did brave the rain could tour the planes then retreat to the warmth of the clubhouse to talk with the likes of Lee and Harold and indulge in a lovely lunch of chili, beer-boiled hot dogs, chips and Famous Amos cookies, served up by Judy and Doug Williams. If you’re going to be stranded somewhere at a cold, rainy airport, EAA Chapter 565 is where you want to be. 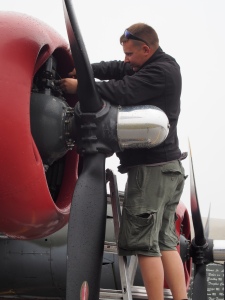 Of course, there wasn’t any more flying that day, nor the next – by the time I had to leave on Thursday night, the team was looking at its third consecutive day of rain. Not good for business, and not good for morale. But the Collings guys have had much worse – there were plenty of tales about trips when there wasn’t a warm, dry building they could retreat to, and spent the drizzled days huddled under folding sun shelters. And of course, there was still work to be done; Mike and Russ always out there in the rain on a ladder, tweaking this, cleaning that. I kept wandering over asking if I could do anything to help, if I could get them coffee or something. I do think they appreciated the camaraderie, but it was pretty clear that I wasn’t good for anything more than that.

I’ll probably next see all these guys in three months, when the tour makes it out to California. Between then and now they’re going to finish working their way around Florida, then west across the South. Would be fun to be with them in Alabama, Mississippi, Louisiana – these are places that are complete unknowns to me, places where you don’t much go as a tourist, and if you do go, you never really get a sense of the people and the places themselves. But I’ve been gone too much already this year, leaving Devon alone with the kids for close to two weeks of this month. May will come soon enough, I expect. These guys will have been living out of vans and hotel rooms, sitting on folding plastic chairs in the sun and rain, and sharing the love of these planes for over four months by then. I expect they won’t mind a fresh face showing up to help out again.

By the way – pics from the trip on online over at https://picasaweb.google.com/david.cohn/20140126Collings

*I was repeatedly thankful that I arrived with a nickname already attached. 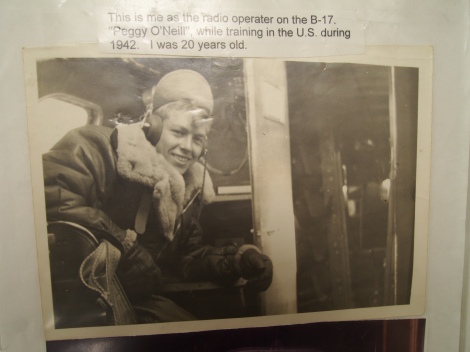 Photo from Harold Plunkett’s scrapbook, showing him at his first posting.

One response to “Rain”