Houses are made differently here. They seem to turn inward, tucking their skirts up under their feet against the winter, waiting for spring to come. The sun has been up for a couple of hours already now, but still casts a flat light against the last traces of snow lingering in the shadow between withered rows of corn – spring may be on the doorstep here in Northern Ohio, but it hasn’t quite yet rung the bell.

This morning we’re driving south along country roads, not because we’ve chosen to take the scenic route, but because we absentmindedly hit “Go” in Google Maps without paying sufficient attention to the directions it chose. So instead of hopping on Interstate 71 southwest, we’re weaving through a succession of two-lane state highways, narrow bridges and the occasional worrying dirt road, acquainting ourselves with towns like Loudonville, Thimbleberry and Jelloway. Instead of passing Applebee’s and McDonald’s, we remark on “Flem and Fran’s – Carry Out / Live Bait”, and “Hick’s Deer Processing”. Instead of tractor trailer rigs, we have horse drawn Amish wagons. Improbably, we still arrive at Kenyon three minutes before our scheduled 10 o’clock tour.

I’ve been here only once before, almost 30 years ago, but poor, patient Miranda has to put up with me pointing and ooh’ing and ahh’ing like we’d just arrived back at my long lost alma mater. They’ve got a lovely campus and here and apparently spring arrived on our heels and let herself in while we were doing our paperwork. Yes, there was still snow and ice and mud on the ground, but by the time we stepped out of the Admissions building for our tour, the sun was warm, and Kenyonites were in full frolic.

The whole idea had been to visit while winter was still in the air, so that Miranda would get a sense of what the bulk of the school year would feel like and not get seduced by the glory of an Ohio spring day. Weather fail. But in the nicest possible way.

Anyhow. Chris and Christie and uh… you know I’m bad with names escorted us around, up through the science building (“look – they’re doing Real Science!” – and they were), through the library (“look – real Kenyon authors!”), theaters, dining hall (“look – allergy sensitive vegetarian comfort food!”), dorms and up and down Middle Path, the gravel walkway that runs the length of the campus. Apparently, by convention, the path and its park benches are considered a “technology free zone” – no losing yourself in Facebook, Twitter or what have you while on the commons. This had not been a problem when I visited in 1984.

It was a lovely day. I went all giddy for the stained glass and old wood and memories, and M apparently came away relatively pleased as well. Next stop: Oberlin! 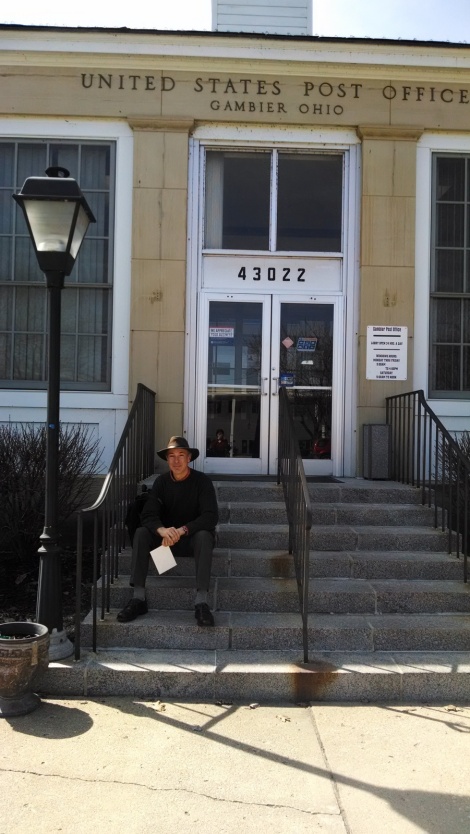