If spring settled in on Kenyon with a sunrise, it blew into Oberlin on a gale. We were woken before dawn with the sound of wind and heavy rains, and by the time we dragged ourselves to the window hours later, the skies were blue and, by some sleight of hand, the grass had turned green. Marsha and Doris, the proprietors of Shurtleff Cottage, were pointing out the front windows, calling “Look, a crocus! And there’s another one!” in some sort of vernal game of Where’s Waldo. It was the same sort of transformation one expects after the first snow of winter, but in reverse.

The wind kept up all day, blowing us from building to building along our tour sometimes seeming close to toppling Olivia, our tour guide for the afternoon as we careened through campus. By the time we made our way to the quad, the temperature had topped 70, and the Oberlinians (Oberliners?) on the lawn had gone WAY beyond mere “frolic”. There is something about spring here in Ohio that’s different from the way I’ve experienced it elsewhere. It carries with it a sort of exuberance that invites you to celebrate its arrival even if you haven’t just lived through the godawful sort of winter the locals here have endured. 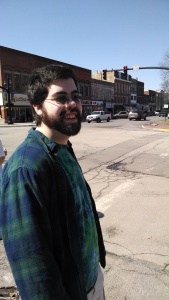 Spring exuberance aside, we did manage to spend some sedate time indoors, meeting up with Charlie Cohen in a coffeeshop where I recognized fewer than half the brew combinations on the chalkboard. Cappuccino I get, a “pourover” I can figure out, but what the hell is an “albino squirrel” or “black eye”? (the squirrel turns out to be a white chocolate mocha with hazelnut syrup; the black eye remains a mystery).  Charlie is an Oberlin senior and the son of my grad school friend William. Compounding the shock of realizing that Charlie was just a couple of years short of the age at which I met William was the discovery that he looks – give or take a swap of 1980’s eyewear for more modern frames – just like his father did at that age. The suspicion that this entire trip is a weird form of time warp keeps inching its way up the reality ladder.

But tonight we’re westbound, to Des Moines, on our way to Grinnell, and mystery. Apparently, in the non-Euclidian world of Delta Skymiles, Atlanta (800 miles to the southeast) is the shortest distance between these two points. More when we get there! 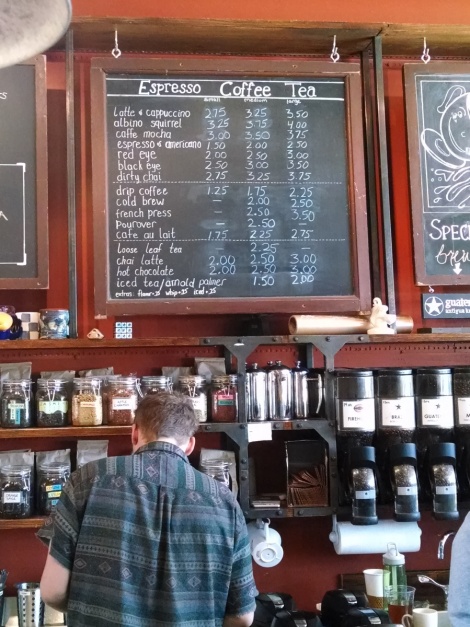 One response to “Oberlin”