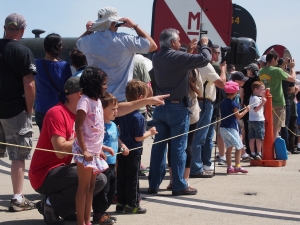 It’s gotten to the point where I feel really guilty for getting to be me. Yesterday afternoon, as we were wrapping up the PX at Moffett Field, Jim checked in with Terry, asking him if he was planning to fly the B-24 on the Livermore move.

“I could, but Pablo’s been wanting to build time. How ‘bout you let him have it and I’ll jump seat?”

“Yeah – you got the ground school sign off, didn’t you? Pappy will be left seat; it’s pretty straightforward.”

So this morning, there I was, popping the brakes and pushing a fist full of throttles forward on a bank of supercharged R-1830s, unleashing 4800 horsepower as we launched 50,000 lbs of WW2 bomber down the runway.

Pappy hadn’t told me until we were done with the runup that I was going to be doing all the flying. “I’ll do the gear and radio and all that,” he said. “Just don’t try to lift the nose below 120, and make sure we’ve got 140 before we’re really climbing out.” He must have seen the look of panic straight through my glacier goggles. “Don’t worry – it’s easy. And I’ll be right there with you on the controls.”

I’d never flown with Pappy before; I assume he has a different given name, but I’m sure I’ve never heard it. The only other thing I’ve ever heard him called is “Ernest” – as in Hemingway – for his looks and bearing. Anyhow, I’d been assured that Pappy was a cool hand and an excellent instructor, but when you find yourself looking down Runway 32L at Moffett Field from the front seat of the only original B-24 bomber in the world still flying? Doesn’t take a lot to make you worry. Especially when you have a cargo of two genuine B-24 combat pilots from WW2 – and their families – sitting right behind you as passengers. And did I mention that this was only the second time I’d ever even been in a B-24?

But once we were up at 40” of manifold pressure and the brakes were off, rudders kept her pretty well lined up on the centerline. Pappy called out airspeeds and gave me the signal to rotate. Aim for 140 mph and positive rate of climb, then tap gently on the brakes to slow the wheels before retraction as we lumbered out over the salt ponds and into the skies of the South Bay. She flew…remarkably smoothly. A bit heavy on the yoke compared to other things I fly (the Skyranger weighs in at roughly 2% the 24’s loaded weight), but seemed to be happy to go where I pointed her.

Pappy was relying on me as the local boy for navigation, so we took a gentle turn to the right and climbed out toward Sunol under San Jose’s airspace, cutting the corner at precisely the right altitude (I felt pretty good about that). Then over the pass, left turn at the golf course and there we were on the 45 entry for Livermore. Mercifully, Pappy took the controls on downwind (“Runway’s a might short for a first timer…”) and I took over the systems checklist, getting flaps and gear deployed.

Short final, we could see traffic stopped all along the frontage road, with people out of their cars pointing cell phones and cameras; the B-17 had landed less than a minute before. I’ll admit, I was tempted to reach for a camera myself, but reminded myself that, as a legally required crewmember, I had other things I needed to be doing right then. Pappy squeaked it on, as usual, and I resumed fielding the radios and working through the post-landing checklist as we taxied to parking.

So. Wow. With this unexpected flight, I’ve completed a bit of a trifecta (a quadrafecta?), logging time in all four Collings tour aircraft: the B-17, B-24, B-25 and P-51. They’re all wonderful in different ways. And I think, if anyone asks me which my favorite is, I’m going to have to say that it’s a bit too early to tell; I may have to fly them all a lot more to decide.

But hang on for a moment

Enough about me, okay? Yeah, I love getting to fly these planes. You get that. But now, especially on this Memorial Day weekend, it’s important to remember why I get to fly these planes. Why I get to fly any planes, and why these planes even exist. Because of folks like the people I was carrying on this flight: Captains Albert Biel and Walter Hughes who made it back from the war, and because of the many, many airmen who didn’t. The youngest men who fought in the Second World War are almost 90, even counting those who lied about their age to enlist. There aren’t many of them left, and it won’t be long until all we have left are memories of memories.

The whole point of the Collings Foundation and its volunteers is to keep the memories alive, to appreciate the sacrifices that our parents and grandparents made us. Not just on paper or in speeches, but viscerally, by peering out the turret of a rumbling, shaking B-17 in flight and understanding what it must have felt like to the teenage kid who was manning that position 70 years ago amid explosions of flak as enemy fighters rose up to meet him.

Now, some people might be surprised to hear a middle-aged pony-tailed hippy guy from California talk in these terms. But the point is that, if you were that teenage kid, nobody cared what your politics were or where you were from. You had put yourself in harm’s way to defend a country, to defend the ideals for which it stood, and to defend those who clung to those ideals but could not fight for themselves. The flak and the Messerschmitts didn’t care if you were a redneck or a Boston blueblood – you had put your life on the line, and that was enough.

The Collings Foundation gets this. There are plenty of – ahem – patriotic organizations who’ll wave a flag about honoring our fallen and lace their speeches with barbs at those whose political affiliations don’t align with theirs. That doesn’t happen here. I’ve been pleasantly surprised at how deftly Collings pilots and volunteers deflect invitations to take part in, um, discourse by folks who come out to see the planes and make certain assumptions about our politics.

“You know,” I’ll hear them say, “that’s none of my business, I guess. I’m just honored to help keep the memory of our veterans alive.”

Pappy, Emma and Albert Biel, and your author

Walt Hughes and your author