It seemed like a good idea at the time: we’re leaving in five days to take the kids for three weeks on the road, to Barcelona, Tanzania and Amsterdam. Being adherents of the Last Minute Panic school of travel planning, we’re nowhere near ready. So what do Devon and I decide to do? Yes, the most obvious thing in the world: skip town for a couple of days on our own, venturing up to the Pacific Northwest and leaving the kids to fend for themselves.

It wasn’t as un-obvious as it sounds, though – we’d been trying to find an opportunity to visit Port Townsend for probably five or six months now, and free time on our summer calendar was starting to look as rare as snipes at a Boy Scout campout.

“So…what about this week?”

“We’re going to Africa next week.”

“Yeah, so not next week. But how about this week?” 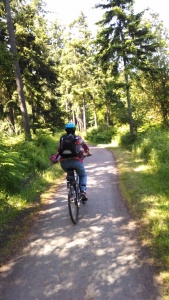 Port T is a harbor town at the tip of the Quimper Peninsula, which is itself on the Olympic Peninsula (I’m sure there’s a Xzibit joke in there somewhere). It’s surrounded by the San Juan Islands and tucked into the jagged shadow of the towering mountains of the Olympic National Park. It’s…stunningly gorgeous. The airport is about six miles south of town, but there’s a bike path most of the way, snaking through lush woods, fields of wildflowers and along the rocky shore. On the way there were horses and herons and kingfishers – we even saw a bald eagle (my first!) cruising over the bluffs at the edge of town.

Came out onto city streets at the harbor and wove our way the remaining half a mile to Water Street, the ostensible heart of Port Townsend’s downtown. Parked our bikes behind the quirky but comfortable Palace Hotel on Water Street and checked in.

Then? We really didn’t have a plan. Walked “uptown”, which, as we discovered, really means UP. Up the winding wooden staircase nestled into the hillside to get to the fountain. Up three more flights of steps to get to the only remaining fire bell tower in the country. Then uphill even more, past quirky shops with quirky, friendly people who smile and chat with you like you’re one of the regulars. Up until…you’re tired of going up, and turn around and walk back down. Down the hill past the grand old Victorian houses and fabulous backyard gardens. Down past the markets with fresh local strawberries and bakeries with cinnamon raisin rolls that take you back to memories of flannel and Sunday mornings. Down to the pebbled shoreline of Hudson Point, where boys skip rocks and dogs frolic and fetch, and mothers wait patiently while their children crawl through the driftwood sculptures. Then back along Water Street, window shopping at bookstores peddling snarky literary t-shirts (“Careful, or you’ll end up in my novel”), sweet shops advertising homemade ice cream (brandied ginger, Mexican chocolate) and coffeehouses, pubs and at probably half a dozen “art” shops that defied categorization. Helped three guys push their pickup truck into a parking space (“Yeah, reverse doesn’t work”), and found ourselves, at dusk, looking out over the water at the indescribable beauty of the Northwest. A guy could get used to this.

This morning we had possibly the best breakfast either of us have ever eaten (cinnamon raisin French toast with ginger ricotta for me; smoked salmon, polenta, leek and cherry tomato hash for Devon – kudos to the Hudson Point Cafe), then tried biking over the hill to Fort Worden at the other end of town. But remember the “up” bit I mentioned before? We decided to save our legs and puttered around town until we started feeling guilty for leaving the kids alone 800 miles away. Biked back to the airport, bought some sandwiches at the airport diner and headed home.

Kids were…unfazed. More dishes than usual in the sink, but you’d be hard pressed to argue that they’d noticed our absence. Mostly they wanted to know what was for dinner and warned us that they’d invited friends over for a movie. Some of our friends, even. Other than that? It was just life as usual for the Cohn household. I think we can count this as a win.

Now – back to the pre-Tanzania panic…