What’s the difference? I asked our skipper, Captain Paoni, and he says that a “ship” is anything big enough to lift a boat onto. But he says he’s not a stickler, and there is a lot of latitude in who gets to call what vessel which name. Apparently, if you’ve served on a ship, you can call it a boat. And if you’ve served as cook on a ship, my brief experience suggests you can call it anything you want (including some terms that have given me a new appreciation for the phrase “swearing like a sailor”).

Anyhow. We’re still in port for another day, offloading the old crew and scientists and onloading the new. Somewhere outside, the Palmer’s cranes have been lifting ginormous crates of mechanical equipment and scientific instruments on and off the aft deck. Here, in the fan-humming isolation of the electronics lab, we’ve been pulling out old servers, running cables and poking at blinky buttons trying to get switched over to new hardware running virtualized machines. The tasks are irregular and opportunistic and seem to go on forever; it’s 9:00 p.m. and I am just now sneaking a few minutes to write. I have to assume the sun came up and went down in the meantime (as much as it does here in the winter); but that’s only an assumption – I don’t think I got around to looking out a window since I came on board last night.

Aside from the occasional, liminal sensation of the world tilting ever so slightly, I could just as easily be in some windowless office in Denver, or Mountain View. Well, except that every drawer has battens, the printers are held down with bungee cords, and all the walls are made of steel.

Once we’re out at sea, Sean and I will break into 12 hour shifts. The traditional rotation is noon-to-midnight and midnight-to-noon. As junior guy, I’ll probably be doing the midnight-to-noon shift (I’ve always been an early riser), though we may rotate the times around – eight-to-eight, or six-to-six – to split up the monotony.

I have the luxury of a cabin all to myself. I’ve heard complaints about the size of cabins on these ships, and let me tell you, this would be luxury, even with a roommate: it’s about four times the size of my plywood and canvas partition at the South Pole, and it’s got a thermostat, solid walls, closet space, some vague excuse for carpeting, and most decadently, its own en suite bathroom and shower. And – note to Polies – no water restrictions: a long hot shower each morning is just a five foot stumble from my bunk. Sure, my porthole (yes, I’ve got a porthole) is obscured by some structural baffles, so I won’t get to look out and see water. And I’m adjacent to a whining compressor outlet, so it’ll be a while before I can tune in around the 170Hz band, but hey, I’ve had much worse. I easily could live here. Oh wait – for the next five weeks, I do. 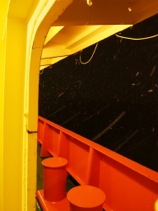 About an hour after writing the bit above I figured I should, at the very least, take a peek outside before tomorrow morning. Out the window it was snowing like Christmas: big wet gobby white flakes sweeping over the deck, swirling around corners and catwalks. I threw on my outer shell and took a stroll around the 02 Deck, up to the bow and around the other side, aft to where the ship’s helipad is covered in Zodiacs stacked like toys left under the tree by a colossal Santa Claus. Got lost coming back trying to find my cabin. They say that after a month aboard, the ship will feel small, cramped. Right now, though? I’m still overwhelmed by the immensity of it all.

[Note: apologies for the possibly wonky formatting here. Once we’re at sea, bandwidth is going to be precious and intermittent, so I’m experimenting with posting by email. I’ll see how this goes, and see just how stingy I need to be with my formatting if it doesn’t work out.]