In the old part of Punta Arenas there is a town square, an elegant tree-lined plaza dominated by a statue of Magellan. Seated natives flank the pedestal below the towering explorer, and the leg of one of them dangles over the edge of the monument, low enough that it has become a tradition for sailors to come here and rub the bronze foot for luck before they set sail.

Tonight is our last night in port, and not surprisingly, I’ve found myself in the plaza again. I keep finding excuses to stroll the town in the evenings, after dinner, after things have settled enough in the lab that there’s no chance I will be of use to anyone. Usually someone is meeting for drinks at El Colonial, or getting another dose of brick oven pizza at that new place on the corner. And there are shops that sell macaroons and street stalls that sell churros, and I can usually think of something I’ve forgotten to pack to justify another excursion.

Usually, though, I just find myself wandering, impulsively turning down unexplored streets, each one filling out yet another line on my mental map of the town. It’s a town I’d like to know better.

My grasp of Spanish is tenuous at best, but when I look for words to describe Punta Arenas – in any language – what comes up most often is “sencillo”: “simple, informal, easygoing”. Gonzalo explained the sensation to me one evening: the only way to get from here to the rest of Chile is by taking one of the two small roads east through Argentina, or riding a ferry north through the coastal waterways. For all intents and purposes, Punta Arenas is an island town, and island towns have their own rhythm and style.

That style is evident even to a gringo like me: Shopkeepers are more than happy to indulge my badly broken Spanish, and an attempt to buy a desk lap turns into conversation about where I’m from, and about my family. Soon enough, we’re both showing each other pictures of our kids and pets. If you ask a stranger for directions, they’re just as likely to walk you to your destination (and in my case, go in and negotiate with the shopkeeper to make sure they’ve got what you’re looking for).

The AMLR scientists – mostly a mix of returning NOAA researchers and grad students – are meeting at Cabo for dinner, and there’s an open invitation for anyone to join them. They seem like a good bunch of people, warm and welcoming, visibly excited to be heading south again, even after all these years. But I linger in the park a little longer. When it comes down to it, I’m still uneasy about this job I’ve signed up for, and need some time and some quiet to confront the uncertainty. Yeah, everybody assures me I’ll do fine, and I know I probably will. I mean, the AMLR folks are so frighteningly competent that they could probably complete the mission themselves if the entire support team and half the crew got washed overboard (not that that’s particularly likely; I suspect there’s an enormous amount of paperwork involved in having someone swept overboard, and nobody likes paperwork).

But I want to do more than just “fine”. I want to demonstrate that I add something important to the team, something they need. Something other than just being a nice guy with a gift for being, as Bill once put it, relentlessly cheerful. Everyone on this ship excels at some mission-critical aspect of the upcoming cruise. And me? So far, being a nice guy is all I’ve got.

Yeah, I’ll be fine. I always seem to be, in the end. And I’ll find my way to shine, and will come away humbled and inspired by what I’ve helped these people accomplish, and eager to come back and do it again next year. But for now? I need a little time to think. I circle the statue again, rub the Indian’s foot once more, and head back to the ship. 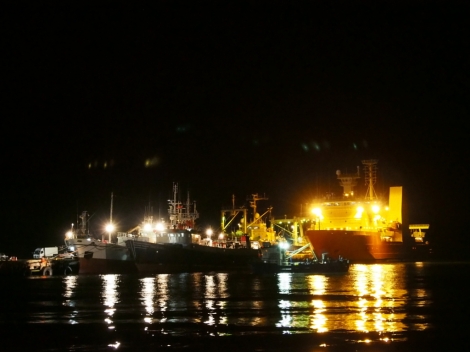 One response to “Last Night Ashore”