Hey – sorry about the radio silence. Once I dipped my toe into coding, the requests for what needed to be done came flying in, and I’ve had my head down in Python since.

But I wanted to tell you about the trawl.

Most of the net tows we do scoop a swath of seawater going down to a dozen or so meters off the bottom, and gather all the little pink swimmy bits occupying that area: krill, amphipods, salps – you know, that kind of thing (he says casually, pretending he’s known what any of these things were for more than a week).

The tow net looks like a kite of sorts, and is light enough that I’ve even helped out on a few. It’s fun: you get to be out on the aft deck with your float coat and hardhat, down close to the water, impossibly blue and cold. You get to help lug the net over the side and watch it play out on the winch, then come back up, its mouth gaping like an enormous black nylon fish seeking revenge (the phrase “We’re gonna need a bigger boat” has suggested itself more than once). Then you roll it in as the winch hauls it over the tailgate, hose it down, and dump the biomass from the gallon-sized “cod end” receptacle into a bucket for the zoo to separate out by species and peer at in their microscopes.

But occasionally they want to see what’s living on the bottom, and when they do, we need to do a trawl. 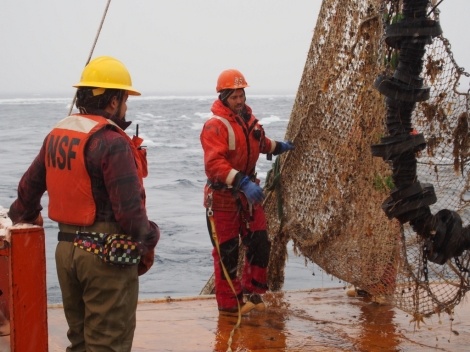 A trawl is *not* lightweight. Us normal folks need to steer clear of the aft deck while the professionals – MT’s Alec and Tom – maneuver a heavy fishing net with a godawful ring of lead weights over the stern with a combination of three different winches. When it gets to the bottom, I expect it creates a narrow little stream of havoc, because when they’ve managed to wrestle it back onto the deck and open the chute, a Santa Claus-sized bag of ocean bottom ugliness spills out all over.

What has Neptune got for us this time?

Everyone who’s available grabs a shovel and bucket, and we haul things, as quickly as we can, to the table where Christopher directs sorting of samples. Elena, Kim and Monika are after the cephalopods, mostly octopi/pusses/pods – a surprising number of them – who have mostly survived the journey up from the deep. They get rinsed, weighed and dumped in a bucket of clean seawater where they float motionless for a minute or two before inking the entire bucket and trying to make a run (swim?) for it. Once the bucket is sufficiently full, they get carried to the side and dropped back over to give them another chance. Do they make it back down to the bottom? We all would like to think they do – it’s surprisingly easy to empathize with the little guys. As Monika explains, they’re the “humans of the invertebrate world”: they’ve got nervous systems organized around ganglia like we do; they reason, they explore; they even play.

Christopher and Emilio are after the vertebrates – the fish – who don’t have as happy a fate. Once they’ve been weighed, etc., most of them get opened up to see what they’ve been eating and what condition various organs are to infer age and health, to get a sense of how life in general is doing at the bottom.

Almost everything else – sponges, stars, snails, sea spiders (another freaky nightmare-inducing phylum), urchins and the like get counted, weighed and referenced against the VME (“vulnerable marine ecosystem”) charts on the walls to help ecologists understand populations and make recommendations about what needs protection, and where.

We tend to keep a few samples, but most everything gets dropped back into the water once its been counted. Honestly though, the prognosis for most of the things we put back isn’t great; as Kim explains, it takes a long while for something like a sponge to make it all the way back down the water column to its natural habitat.

Anyhow – that’s the trawl. We’re back in open ocean, about as far north into the grid as we’re going, and the swell from the Drake is definitely a factor in getting anything done. The team has settled into a rhythm, and it’s hard to believe that we’re already half done with the cruise. Abe and I made it into the next round of the darts tournament (I still have no idea how the game is scored), and a 1970s dance party broke out in the zoo lab about an hour into yesterday’s midnight shift. I’d never noticed the disco ball mounted above Kim’s microscope station, and she’s not saying where it came from.

We’ve also had some musicmaking of our own: Tom and I had a little banjo/guitar jam while waiting for one of yesterday’s CDTs to come up, and Monika, Elena and I have been caught cooking up harmonies on some Pearl Street favorites. A couple of days ago, Captain overheard us and got on the radio to have one of the ABs bring fetch his cat ‘o nine tails. You think I’m kidding? That’s what he said, too. Too much frivolity, he said. Now, if we had any good piratical songs where lots ‘o people died, those might be okay. Oh, Emily Groff – where are ya when we need ya?

It’s hard to see how blue and clear the water is unless you’re looking through it. Here, we’re looking at the white PVC frame of the CDT through about 10 meters of water.

One response to “The Trawl”