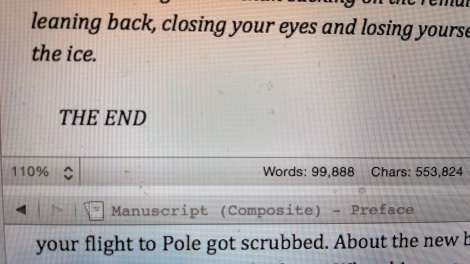 So, a little over four years from when I set the first words down, five and a half months after I threw out my third draft and started again from scratch, a mere 112 words shy of that magic six-figure word count, I found myself at my favorite table in Coupa Cafe typing something entirely unexpected: “The End.”

Yeah. It’s done, kind of. I mean, the first draft of the fourth try of it is done. It’s awful and disjointed and will need to be torn back to bare bones and rebuilt nut by bolt, but for as close an approximation as anyone can say, I appear to have written an actual gosh-darned novel.

Yay me. I celebrated by having ice cream and chocolate-covered raisins for dinner, and am looking forward to regretting it.

Anyhow, to answer your first question, it’s about Antarctica, and finding a sense of place.

To answer your second question, no, you don’t get to read it. No one, no one, no one gets to read it, not until I’ve rewritten the damned thing from the ground up because, as I said, in its current form, it’s unmitigated eye-bleeding crap. But that’s okay, because every writing teacher I’ve ever read, listened to or talked with has assured me that first drafts are always crap. The whole point of the first draft is to write crap, and to write as much of it as you can.

You write that crappy first draft so that when you step away from it for a few months to resuscitate those long neglected familial and social relationships you can come back and, with a clothespin on your nose to block the stench, dig through that ugly mountain of crap and see if you can figure out what you were trying to say.

Remember all those awful English classes where the professor made you read something Deep and Important and Monotonous, then had you write a thousand word analysis on “What is the author really trying to say here?” And you got to the end of it, where everyone was dead and  protagonist has just walked out into the sea and let the waves carry him away and you’re thinking “How am I supposed to know what the author is trying to say? That childhood swimming lessons are a good investment?”

Well, if you’ve written a novel, that mountain of garbage you’ve generated is your vindication: this is the one time, the one time only in your life that you get to decide you know exactly what that damned author is trying to say. And not even Ms. Speyer can tell you you’re wrong.

But the point is that I’m fine with the current, awful state of the novel. For now, the important thing is that it’s done. I’ve written it, damnit, and now I’m going to put it down and walk away for a while and do other interesting things. Write some long-overdue non-fiction. Go flying. Read an actual book that isn’t source material. For fun. Go on a real date with my wife.

I’ll let you know how all of that goes, okay?