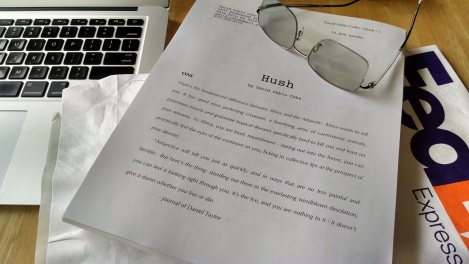 Raise your hand if you’re tired of hearing me whine about “That Damned Novel.” About how I can’t do this or that, or am slow to reply because I’m trying to finish That Damned Novel. Yeah – sorry about that.

To be fair, I sort of finished it once before, but it was a ridiculously sloppy first draft that didn’t actually – when I went back to read it – make any sense. I guess what I’ve done now is finish the sloppy second draft, which probably still doesn’t make a ton of sense. But it’s in decent enough shape that I was willing to send it off to both my writing coach and my editor. Which I’ve done. Done. Done done done. In the mail and out of my hands, and you can’t imagine what a burden feels like it has been lifted from my shoulders. No, scratch that – I’m sure you can imagine. I realize that in the grand scheme of things, this has been a relatively minor labor. It’s just been weighing on me for a long, long time.

Good question. First, I’m going to take Jeremy out for a celebratory sushi dinner. Then I’m going to get on an airplane and disappear up to Port Townsend for a bit. I expect I’ll be telling you more about that over the next few days. But that’s all short term. What’s really next, on a larger time scale? That’s a damn fine question.

I have, beside the little litho prints of Rembrandt and Hemingway above my desk, an array of Post-Its, each with a phrase on it. Things like “Flying,” “Novel,” “Science Book” and the like. I keep them sorted in some vague order of priority of what I really want to be spending my time on. They’re pretty handy: if, when I look up from my desk, I realize that I’m not spending my time on one of those things at the top of the Post-It list, it gives me pause to finish up whatever I am doing and get back to what I think I should be doing.

Needless to say, “Novel” is moving to the bottom of the list. Not planning on thinking about that for as many months as I can manage. But below it? Haven’t decided quite yet among the many contenders. There’s that ill-advised project up in Port Townsend. And I really need to get moving again with the science book – this is the season to start hooking back up with all the Antarctic science folks coming back from the ice. And then, of course, there’s that backlog of new short stories from the latest travels – I do think I’ve got a couple of good ones I need to throw on the anvil and hammer out.

But for the moment? I think I’m going to enjoy this weird lack of feeling like I REALLY NEED TO BE WORKING ON THAT DAMNED NOVEL for a little while. And then I’m gonna head out to Los Altos with my son and stuff myself with sushi.