“The sweet smell of the land blew out to us on a warm wind, a smell of sand verbena and grass and mangrove. It is so quickly forgotten, this land smell. We know it so well on shore that the nose forgets it, but after a few days at sea the odor memory pattern is lost so that the first land smell strikes a powerful emotional nostalgia, very sharp and strangely dear.”

– Steinbeck, Sea of Cortez: A Leisurely Journal of Travel and Research

I’ll admit right away to not having made it far into Steinbeck’s exploration of Baja. But what little I have has found him to be a kindred spirit and dear companion on my own month of seafaring. You may remember I’d complained earlier how the voyage seemed to have robbed me of the ability to smell anything but the most astringent scents. When I climbed to the bow after we took up station to wait for room at the pier, the air felt unseasonably warm and the sun unseasonably bright. And the gentle offshore breeze carried on it the distant and inexplicable but unmistakable scent of corn tortillas, fresh from some oven.

With that scent came a sort of awakening of a thousand others, and suddenly my head was clear in a way it hadn’t been in what seemed like forever, and the land called to me like a pretty girl smiling from across the courtyard. A courtyard that, for lack of inscrutable ceremony and paperwork, I could not cross.

Steinbeck had his own maddening delays coming ashore at San Lucas that morning: waiting for the local officials to get suitably cleaned up, shaven and dressed for the occasion of coming aboard and serving their customs papers. He takes it in with the droll eye that makes him such a pleasant travelmate:

It developed that the Governor of the southern district had very recently been to Cape San Lucas and just before that a yacht had put in. This simplified matters, for, having recently used them, the officials knew exactly where to find their uniforms, and, having found them, they did not, as sometimes happens, have to send them to be laundered before they could come aboard.

But in our case, relief was not to come so soon: the sticking matter was still room at the pier, of which there would still be none for a full day and a half. So we bided our time in close view of landfall, pining for the promise of the shore. At least I did. The wiser and more experienced on board went about their business as usual, wading through paperwork and securing equipment for offload, glancing out only occasionally, as if the coastline were a lovely but distant mirage. Eric, our wise and kind MPC (Marine Projects Coordinator – our den mother of sorts) recognized my symptoms. He gave me the good counsel to treat it as such, reminding me that this day was a gift: we were supposed to still be bouncing around in scud and open water; instead we had warm sun, a quiet harbor and internet. Shouldn’t that be enough?

Oh yes, did I mention internet? The USAP warehouse at Muell Prat has a directional wifi connection that can blast real live internet out to the ship from as far as seven miles away. And I’d be lying if I didn’t admit that, as soon as we got the fleet broadband switched over, I went below, brought up my browser and binge-read an entire month of webcomics. So yeah, I had no cause for complaint.

Dusk came around 11, and with it, reinforcement of the carnival atmosphere ashore. Fireworks were to be just off the promenade north of the pier, giving us a clear if not front-row view to the festivities. When they came at midnight to welcome in the new year, the show went on for what felt like half an hour of concerted pyrotechnic exertion; Latin countries, I understand, love their pyrotechnics. We gathered on the starboard rail and ooo’ed and ahhh’ed. All down the coast, too, you could trace the shore from the line of red signal flares sent up by mariners who, presumably like us, found themselves afloat for the changing of our calendar.

And when it was over the harbor was enshrouded in smoke and the smell of July 4th. The Southern Cross hung upside down high overhead. This may be the first time I’ve actually seen stars this far south, and my glimpses of the cross have always been more equatorial, with its pointy-end low to the horizon. To see it overhead, and “upside down” – as I guess it must always be this far south – seemed wrong. But the southern celestial pole was indeed up there somewhere in the unfamiliar sky.

On shore, the celebrations seemed to have burnt themselves out with the fireworks. Our little celebration on the starboard rail had likewise dissipated. Tomorrow would be another day of paperwork and securing equipment for offload. And, if I allowed myself to lean out on the bow,  more gentle urgings from the tantalizing promise of shore. 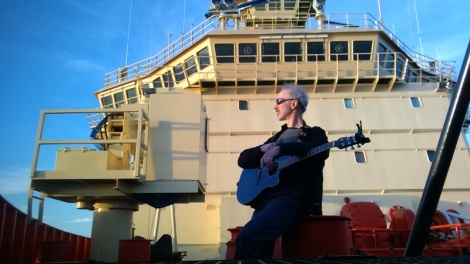 One response to “So Close…”