The sea is not, I think, something for those who regard the world in terms of conquest. A mountain can be conquered: Zebulon Pike’s “unclimbable peak” is now saddled with two lanes of state highway, at the top of which tourists can buy hot chocolate, corn dogs and souvenir keychains. But the sea can not be paved, can not be conquered. It can only, if one is prepared and fortune smiles, be survived.

Some go to sea out of necessity: to flee adversity, to find their fortune, or simply out of a daily need to feed their family. The rest? I think it may be because they want to learn something about themselves, by holding themselves against it. Adversity has a tendency to burnish away the many things that casually attach themselves to our lives, and I think those who seek adversity often do so in an attempt to strip them away by its wheel, and discover what metal lies beneath.

We made landfall of sorts about nine thirty last night, as the ragged point of Cape Pilar emerged from the low scud off our starboard. This morning, we are already deep into the labrynth of the Strait’s eastern passage. Westward travelers found the entrance easily enough along the hooked Argentine coast, but generations of captains strove and failed to mark where, in the maze of western fjords and bays, the true passage east began.

The land, as I wrote when we were outbound, is stark and majestic. It rises sharply on both sides, from tangled forest below to jagged, mist-enshrouded peaks above. Glaciers clinging to the mountain side feed tumbling waterfalls that wind their way down the cleft of exposed rock. The whole landscape seems to defy human existence with its scale. I fear that when we do return to civilization (such as it is) we will find it uncomfortably small, like a favorite shirt from school that we don’t remember having outgrown. 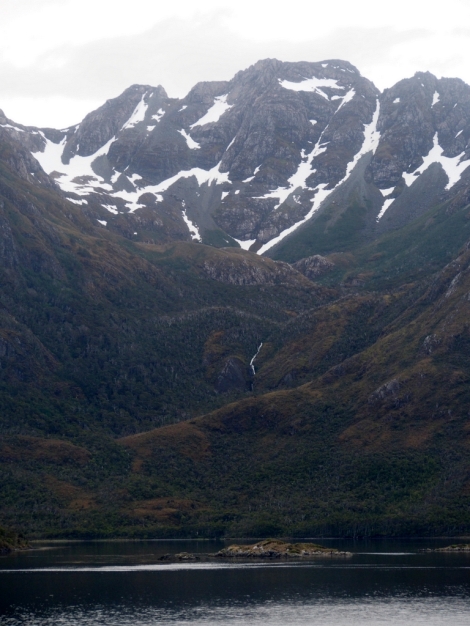 Speaking of civilization, it will take us the rest of this day to thread the Straits as far as Punta Arenas, but as we are a couple of days early, there is no room for us at the pier. So we will spend New Year’s eve and day in the harbor, eyeing a tantalizing shore and idly musing that nobody would *really* mind if we were to commandeer one of the Zodiacs for an excursion. No, Chilean customs would really mind. Really really mind. So we’ll bide our time on board until they’re ready for us some time on the second, and tumble into town for a celebratory beer or something. And then, amid the next four crazy days off offload and turnover, talk excitedly with each other about when we’re next going out.

7 responses to “Return from the Sea”