It took the away team three excursions out to the buoy, jury-rigging scavenged electronics into place under the hatch of a Volkswagen-sized pod bobbing in the the open ocean, but they did it. SUMO2 is again fully functional, and we’re done here.

I didn’t know we were underway until the RVDAS told me. Past two days I’ve mostly been below deck hammering out new code, scratching my head, re-architecting and repeating as Bug and I slowly push back the frontier of extreme coding in a language neither of us has ever particularly touched before. No, it’s not the traditional definition, but I think 12-14 hour shifts below deck of an icebreaker in the southern ocean, rewriting software for a data acquisition system WHILE IT’S STILL RUNNING counts as extreme coding. You know I’d be lying if I said I wasn’t having fun (But, it would still be nice to be able to go online and search Google for what the hell “Warning: undefined is undefined” is supposed to mean.)

Sometimes, I’ll admit, it’s hard to remember to go above and get out on deck. But it’s always worth it, and if you’re not going to the back deck, you don’t even need to throw on the Xtra Tuffs, a float coat and a hard hat. Just wander up to the 01 Deck and pop out onto the starboard rail in whatever you happen to be wearing. Sure, it’s chilly, about 7C, but the air feels good. And now that the wind’s dropped, the stillness itself is refreshing. 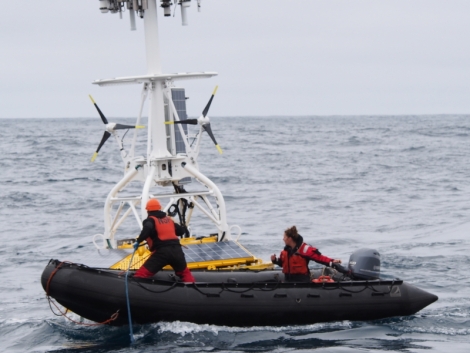 Josh and Krista lasso SUMO1 to bring it on board

We’ve had remarkably, unreasonably flat seas since the storm. The last two retrievals – even lassoing the gargantuan SUMO1 buoy and lifting it and all its submerged gubbins on deck – went so quickly that once everything was lashed down, John and the back deck gang seemed to be looking around as if unable to believe that they’d gotten everything on board.

Of course, the work wasn’t done yet: SUMO2, which we’d deployed a couple of weeks back, was having fits. Remote diagnostics revealed that two of its four solar cells were not generating power. Worse, the governor on one of its two wind turbines was non-functional, meaning that it would overspeed and burn out or throw a blade in the next storm. As further evidence that Murphy’s law extends to the Southern Ocean, the balky turbine was opposite the misbehaving solar cells, meaning that if it threw a blade, there were better than even odds that it would take out the solar panels that did work.

Given the flat seas and risks of beginning a deployment with such compromised power, science and the captain agreed to try a field repair. There was no good way to retrieve SUMO2, and nowhere on deck to place it, so John organized an away team. Rick, Chris, Miles. Mike and Mark climbed into the Zodiac with the ever-steady-on-the-tiller Josh at the helm and motored off to have a look.

Captain held station downwind with SUMO2 a thousand feet or so off the bow. Watching five people motor off into the open ocean in a little rubber raft eight hundred miles from the nearest land produces a remarkably sobering feeling. I remember Krista saying something poetic about how being in a Zodiac out here reminds you of the smallness of our lives against the canvas of the world. Josh, I think it was, said that they were far enough away that you could cover the ship with your thumb, and even with the sea so flat, there were times when they lost sight of it entirely behind a swell, giving the fleeting sensation of being completely alone out there. You know I’ve always embraced novel experiences, but I have to tell you: I was glad enough to just watch the operation from the comfort of 01 Deck.

I’ve often compared life aboard the Palmer to what I think life must feel like for an astronaut aboard the ISS, and watching the away team out there was like watching colleagues depart the relative safety of the station to snatch a satellite out of orbit. They made three trips in total, the first to diagnose the problem (some fried diodes on a controller board) and the second to attempt a fix. Finally, around what would pass for dusk in most parts of the world, the decision was made to try a radical repair: a controller board would be pried out of SUMO1 (“caution: contains no user-serviceable parts”) and jury-rigged to replace the burnt-out one in its kid sister bobbing out off the bow.

The drama at the buoy was too far out to make out any detail, even through my telephoto lens, but at one point, Rick was visible head down inside the damned thing, feet aloft out of the service panel trying to get the board connected. It looked very cold and uncomfortable and took what seemed like a very long time. As the fog moved in, I retreated to the comfort of my below-deck Javascript code.

I’d been trying to debug some widgets I’d written to let users create custom displays of ship and science parameters with a few clicks. So it wasn’t until an hour or so later that I noticed that the s330 display (which was finally working) showed a steady course of 077 at 10.8 knots. We were moving to the northeast, and at full cruising speed.

Email from Sebastien popped up less than a minute later confirming it: fantastic work from all on board. Mission accomplished – time to head home.

Mind you, we’ve still got over 700 miles of ocean to traverse, a layover at the fuel dock and customs to clear, so we likely won’t set foot on dry land until Jan 2nd (woohoo – New Years onboard at a fuel depot!) But it means we’re done here, on the downhill run.

Of course, it also means now that I’ve only got a few days left with Bug to try to get all the code into a stable form that they can keep working on in my absence. We’ll have three or four days in port during the turnaround, but that’s always chaos, and Bug is going to be scrambling full-time setting up the handoff to the new crew and helping them replace broken hardware and install whatever crazy equipment is needed for NBP1512.

But it’s going to be hard not to succumb to the sense of accomplishment and kick back just a little. Science team is planning a series of standup talks on anyone’s favorite obscure topics, and I think we’ll finally manage to have that ping pong tournament. More, as they say, as it happens.

Rick Sanger, man of the hour, has plenty to smile about