At 78S 168W, we have come out on the other side. We’re still a day shy of the antimeridian and international date line, but almost on cue as we approached the Bay of Whales, the clouds parted to reveal a midnight sun gleaming down on the towering walls of the Ross Ice Shelf. It, like most of Antarctic geography, defies description by mere numbers: an impenetrable wall of white rising straight up out of the sea for hundreds of feet, stretching unbroken as far as the eye can see. The map says it goes on for 500 miles, and its interior is the size of France. 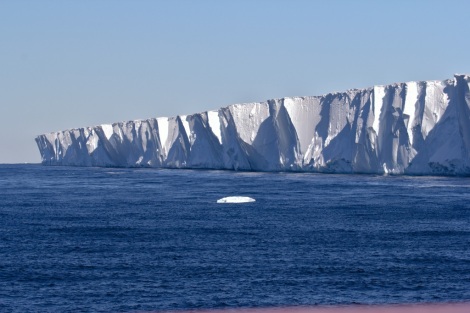 Beyond the sun (which we haven’t seen in two weeks) and some semblance of land (ditto), we have crossed over in one other, perhaps more vital, way: the internet’s back. But more on that later.

The Bay of Whales will ring a few bells for fans of Antarcticana: it is the site of Amundsen’s landing, where he staged Framheim, the base from which he launched his dash to the Pole. It is also, a little further in, where Richard Byrd established Little America, the first US presence “on” the continent. Of course, they were built on the ice itself, and the sea has long since taken them both. Point of geography, too: the Bay of Whales is as far south as you can sail. On the other side of the continent, the Filchner Ice Barrier stops you at the foot of the Weddell Sea at 78’ 24”S. Here in the Ross, the Bay of Whales admits you a tidy 12 nautical miles further south.

We’re not ducking all the way into the bay, though – we’ve got Science To Do. But I’m attaching a picture of the Palmer snugged right up inside that I snagged from Wikipedia (because, you know, internet). Just to give you a sense of perspective.

Depending on how you count things with the date line, we’ve got another five or six days of work ahead of us before we make port. And ice shelf be damned, the Ross Sea has been giving us our first serious sea state, so things are far from coasting to the finish line. But with the sun and the sighting of the ice – just one more sea to traverse! – it really does feel like we’ve come out on the other side.

Oh, and because Antarctica, penguins. Must have pictures of penguins: 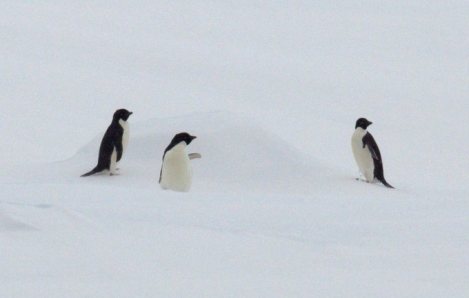 8 responses to “On the Other Side”