There are worse ways to meet the neighbors, but I suppose there are better ways, too.

I’d gotten an early start into pulling out the Scotch Broom above the house pond – I figured I’d see how far I could get before my arms gave out and wanted to get to it before it got too hot. Good thing about pulling it this time of year is that it’s in full bloom, so you can tell where it all is, but it’s not yet gone to seed, so (if you’re lazy like I am) you can just pile it up and leave it for some day in the future without worrying that the carcasses are going to spawn the next generation of invasive alien zombie plants.

I also wanted to be done before 8:00, when the cable guy was supposed to come see if we had enough copper leading to the Danger House to actually drive a broadband signal.

But it was a lovely morning: the mountains were out again with a vengeance and the sky was careening with barn swallows. 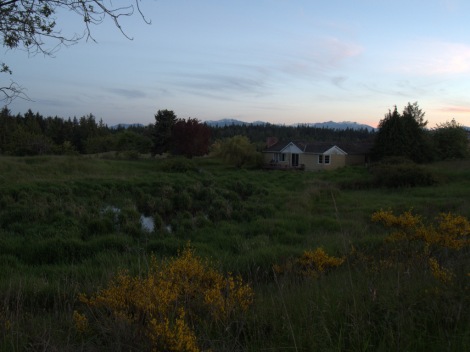 We’d invested in a device called “The Extractigator” – a Canadian-built weed wrench that would be worth it for the name alone, even if it weren’t so good at pulling up recalcitrant weeds. It seems unfair to call an eight-foot tree with a four-inch trunk a “weed”, but I don’t want to get into semantics here. I just want them out.

I was about halfway through the Scotch Broom when my phone rang the first time: an automated message reminding me that my Wave Broadband technician would be arriving this morning between…eight and…ten o’clock, and to please press “one” to confirm.

Somewhere far off, a dog yipped. Across the fence in the eastern pasture, Anna’s cows startled and galumphed up the hill. The barn swallows continued to spin a chirping avian tornado above the pond. Life was good.

“Good morning. Is this David Cohn?”

“This is Jim Smith with the Port Townsend Police.”

“Your neighbors are trying to get ahold of you. Apparently you’ve got some cattle wandering up and down Hood Street?”

I looked up the hill to where the cows had been galumphing just a few minutes before. Nothing. Damn.

I thanked Officer Smith for his attention, dropped the Extractigator and went galumphing down the hill to the lane, where I could now see a police car at the corner and an unfamiliar figure in slippers trudging down the road toward me.

The neighbors were lovely about it all. Tim and Janet had managed to shoo the cows back through the break in the fence they’d discovered, and we and the other neighbors all gathered along the breach to chat and exchange introductions with coffee mugs in hand. Tim plays with the Eagle Mountain String Band and Peter is a pilot, so there was no shortage of things to talk about, in spite of the awkwardness of the initial situation. I felt strangely like I ought to have brought coffee cake or something.

Anyhow – they’ve been apparently following the blog via Facebook (Hi all!), were pleased to see what we’re trying to do with the farm, and were pleased to finally meet me in person. We’re going to try to get together under more conventional pretenses on our next trip, and I’m going to have to remember to bake a couple of pies.

Anna confirmed Janet’s speculation that the ringleader of the break was one of the tan mom cows – she’s apparently been a troublemaker since day one, and was already scheduled to head to freezer camp this fall. In the meantime, Anna and Brian are going to move the whole herd down to the south barn pasture, where there’s fresh grass and fewer temptations to meet the neighbors.

Just because there are still frogs *everywhere*.