Let me just go on the record here that the best lemonade on the entire planet, and perhaps – at risk of going out on a limb – the best liquid form of matter anywhere, is served out of a funnel cake trailer by a little old lady from central Oregon. Mind you, context may have swayed my judgement a little, but bear with me.

So, we’d been planning out this trip, to some degree, since at least 2009 (email thread says: “USA in 2017, I think we might be able to make it. But wow – we’ll all have grown kids!”). I’d seen a couple of eclipses before, one of them with Devon, but this looked like an easy opportunity to introduce the kids to the freaky unreality of a black orb glowering over windless, dead and unnaturally dark noon sky.

Of course, we weren’t the only people to recognize an opportunity to traumatize our offspring, so the better part of the population of the western United States also took to making plans to squeeze into a 70-mile strip of land swinging from the Oregon coast, through the heartland and out to sea off South Carolina.

Many places along the path of totality were isolated and inhospitable, served only by long stretches of two-lane road. We knew that, without some planning, it could get ugly.

Obviously, some viewing spots were better than others. A friend of mine in Oregon told of houses on the coast renting out for close to ten thousand dollars for the day of the eclipse – perhaps the owners had neglected to tell their renters that the Oregon Coast is invariably deep in fog these summer mornings? (“Oh, such bad luck – it’s usually crystal clear here!”).

We settled on the town of Madras, Oregon (“It’s pronounced ‘mad rass’,” said the firefighter, “Like you’ve got some angry rodents.”). It was in eastern Oregon, where the weather was reliably clear, it was smack dab in the heart of longest totality and, most importantly, it had an airport. So rather than contending with the over 100,000 people who were forecast to overrun the town (nominal population 6,729), we’d only have to contend with the 350 other airplanes who’d registered with the airport authority. Right.

Flight up was lovely – stuffed the kids, about 70 pounds of camping gear and emergency supplies in the back of the plane, and launched north. We figured we’d go up a day in advance, so that if there were any last-minute problems with the plane, we could hop back in the car and join the rest of humanity in the insane traffic.

The Oregon landscape thereabouts is unearthly gorgeous – old lava flows, collapsed calederas and maars (yes, that’s the right spelling – we had to look it up), all evocatively named by true poets of the west: “Hole-in-the-Ground“, “Big Hole,” and its neighbor “Crack-in-the-Ground.”

But on to Madras. Landed, taxied as directed across a crazy gopher field to our assigned parking spot at the north tip of the airport. This is where you should start imagining the first strains of ominous music whispering liminally in the distance. We’d prepared well for the high desert heat of eastern Oregon and tromped down to the south end of the field where the food booths, FBO and fuel were. Put in a fuel order and got to absorbing the local vibe. There were three or four different kinds of barbecue, three kinds of lemonade vendors, frozen mango on a stick and enough “The Great American Eclipse” swag vendors to clothe the the third world. There was a beer garden. There was a band. And there were clearly more airplanes than the airport had bargained for. 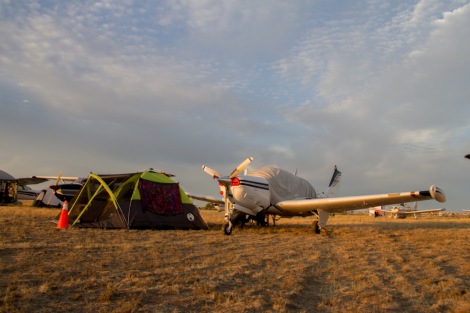 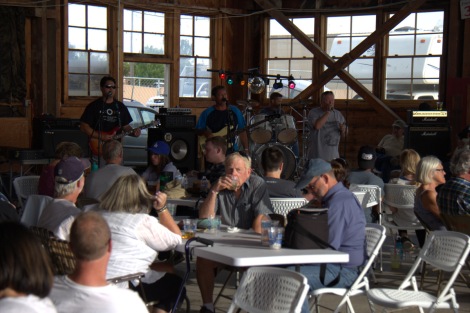 Caught up with a bunch of fellow ex-Google pilots (I’d expected to see), and Ken Gladstone, my college roommate, who I’d not really expected to see. But Ken has his own form of the pabloverse, and had only decided a couple of days earlier that hey, maybe he should go up and see the eclipse. So there he was.

Got a brief, impromptu display by the Erickson Air Museum’s WWII collection, returning at dusk from an airshow in Canada, and fabulous, fabulous mountain sunset tinged red and orange by the woodsmoke. 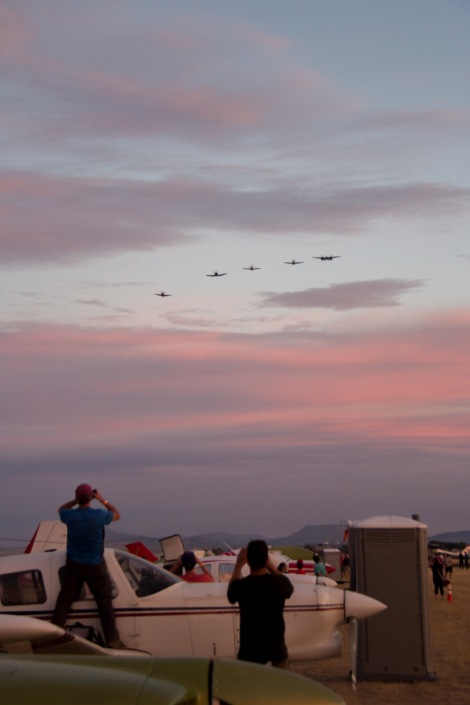 Oh, I didn’t mention the smoke, did I?

Yeah, well the problem is that, as far as I can tell, most of Oregon is on fire. Everyone flying in had to dodge temporary flight restrictions right and left, set up to support aerial firefighting efforts. 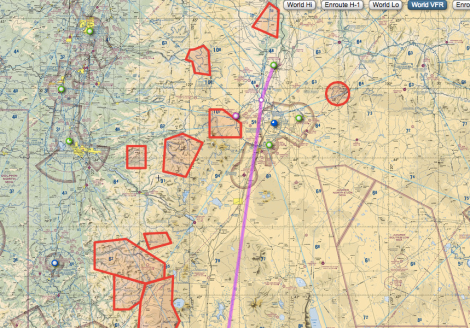 Dawn broke way too early, with a nearly unbroken stream of Gulfstream V’s and Global Challengers (think “big business jets”) rattling our runway-side tent with full thrust reversers starting a little after 5 a.m. But the sky was clear. Mostly. That smoke to the south wasn’t going to slide north and get in our way. Unless it did. 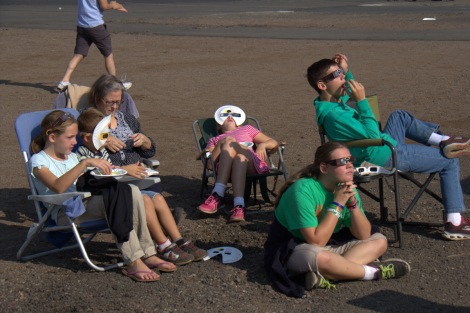 Tension built as the 9:09 start of occlusion approached. Those who had partied all night and those who had asked them, in increasingly less delicate terms to please shut the @$^%$%# up seemed to have buried the hatchet. I sacrificed one of our cheaper-by-the-dozen eclipse glasses to jury rig a filter for my camera and tested it out on the barely clipped sun. The smoke continued to threaten.

The funny thing about eclipses is how subtle the effect is: you don’t notice a thing until the sun is nearly 70% occluded. And then it’s just something in the quality of the light – it feels flat, the way it might in late afternoon with the sun low in a clear sky. It’s only in the final minute or so before totality that things get weird, and then it all happens in a hurry: the wind dies and the air gets still. The birds go quiet. It’s warm out, but you feel inexplicably cold. Mount Jefferson, to the west, is there, and then suddenly it’s only a shadow. And then, Boom. Out go the lights, and the sky feels turned inside out. There are stars. People are shrieking, whooping, kissing, dancing. Taking a lot of photos that will look just like everyone else’s photos. 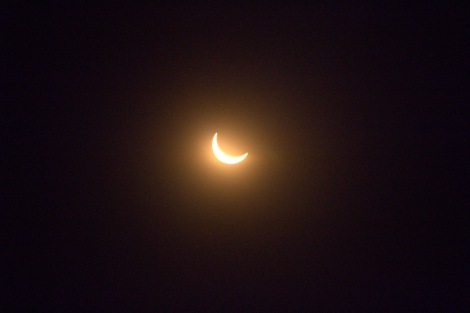 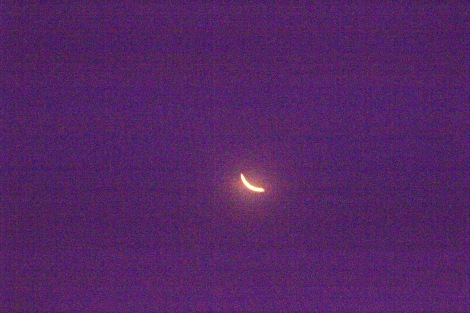 It feels weird, unearthly. You can’t put words to it, but millions of years of evolution have tuned us to what “normal” is in our world, and something very deep in our core is screaming that this is not it.

Then there’s a flicker in the sky, the momentary Bailey’s beads and “diamond ring” as the first traces of sun make their way through the profiled mountains and craters on the moon’s surface, and whoosh, the light’s back. Just like that. We’re still something like 95% occluded, but everything feels normal again, and people deflate and collapse to the ground as if exhaling after holding their breath too long. We’re all exhausted, and look around at our campmates, now strangely bonded for life (I’m still in occasional contact with the Welsh family I stood next to during my first eclipse back in France in 1999 – we even met up in Turkey in 2006 for a reprise!)

And then it really is over. We’re still at what, 80% occlusion, but everyone is done. Done, done, done. Those who drove in, run to their cars, where they will sit in traffic until nightfall. We fortunate pilots run to our planes. Except, well, they’re departing from the south, and we’re at the tippy-top northernmost point on the airport, with well over 300 planes between us and the run up area. And did I mention that we still hadn’t managed to lure the fuel truck over?

You had to pity the fuel truck guy. I do believe he was up all night, emptying his truck into the tanks of impatient pilots anticipating the outgoing rush, refilling his truck, and going out again. 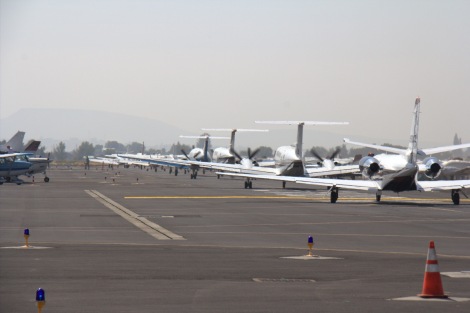 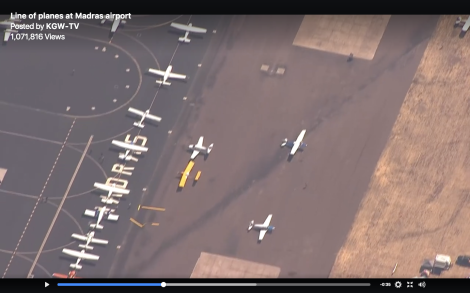 Short story was that the eclipse was “over” by 11:00, but it was almost five o’clock before we made it to the run up area. There was no point in firing the engine up, because the line moved a few feet every ten minutes. But the net effect of this inching forward requirement meant that we spent the second half of the afternoon slowly dragging a 3500 lb. airplane about 3/4 of a mile across desert tarmac in 89 degree heat.

By the time we were ready to go, we were more than done. We were past dehydration, in spite of drinking as much as we could. My legs were like rubber from dragging the plane. Miranda had been accidentally doused by avgas, and Devon and I were pretty sure we’d said some things to each other and the kids that we’d regret for a long time. And it was time to climb in, fire up, and spend three hours in a cramped plane, flying south. Jeremy asked for a few dollars and scrambled north, to where the trailer with the funnel cake lady stood. Maybe she still had some lemonade?

(Flight home was lovely and uneventful, arriving back in Palo Alto at sunset. Devon and the kids were amazing troopers, giving everything they had and remaining cheerful – more cheerful than the grownups – under unpleasant conditions. We’re enormously grateful and proud of them.)

6 responses to “Out Go the Lights”